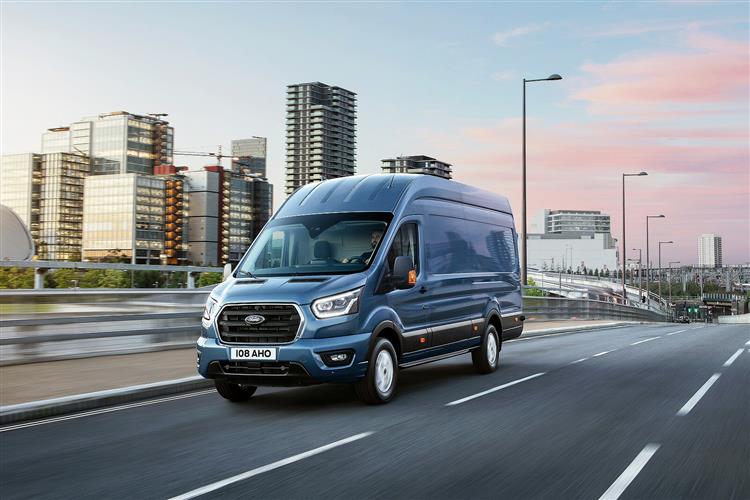 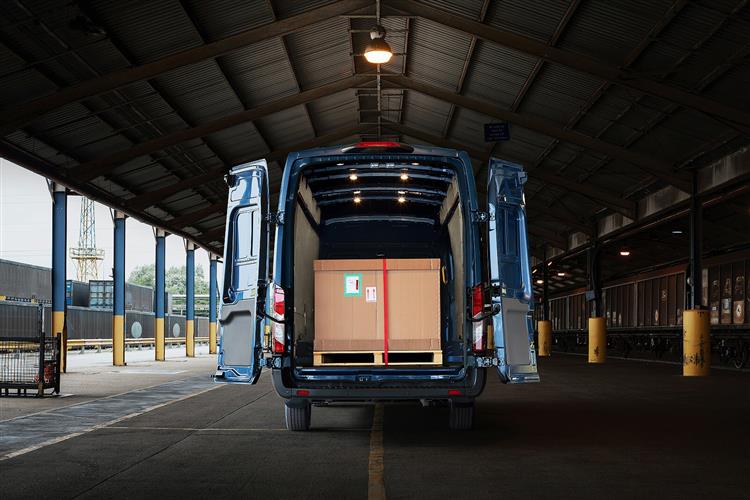 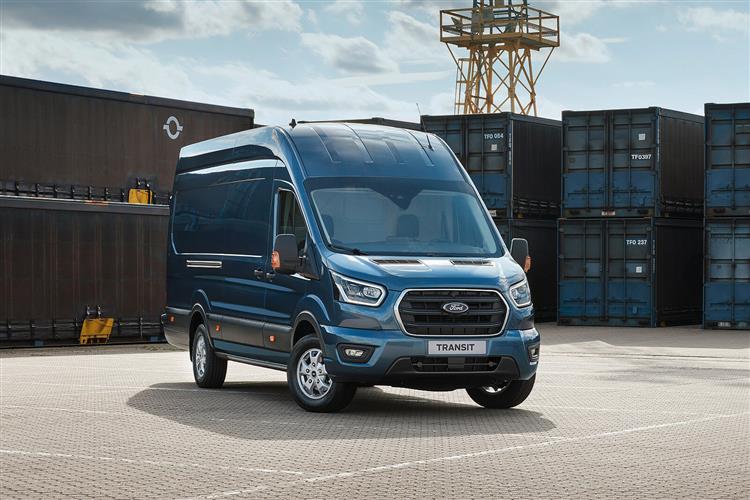 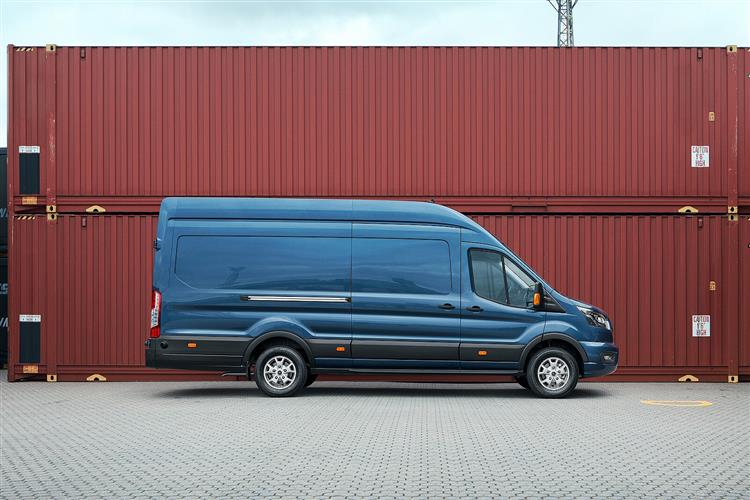 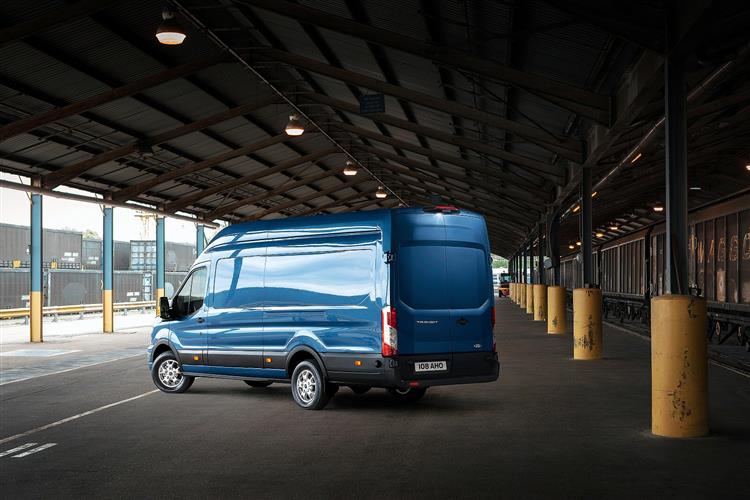 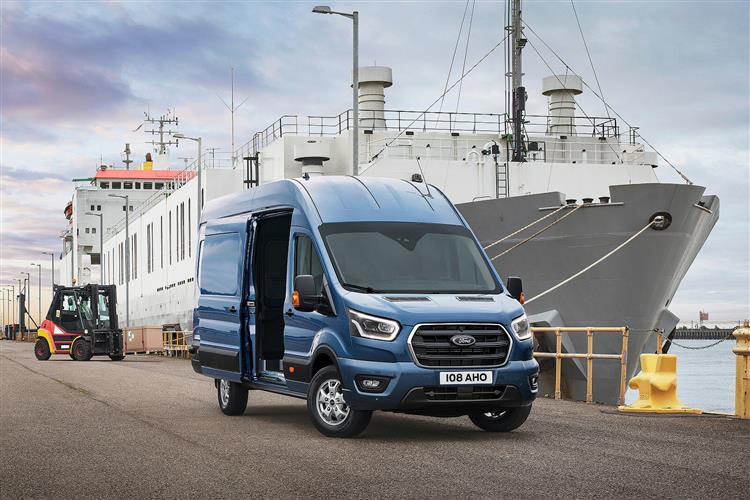 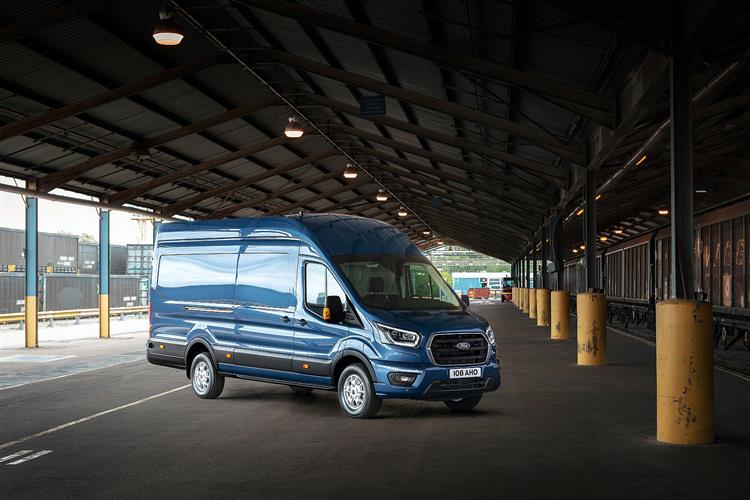 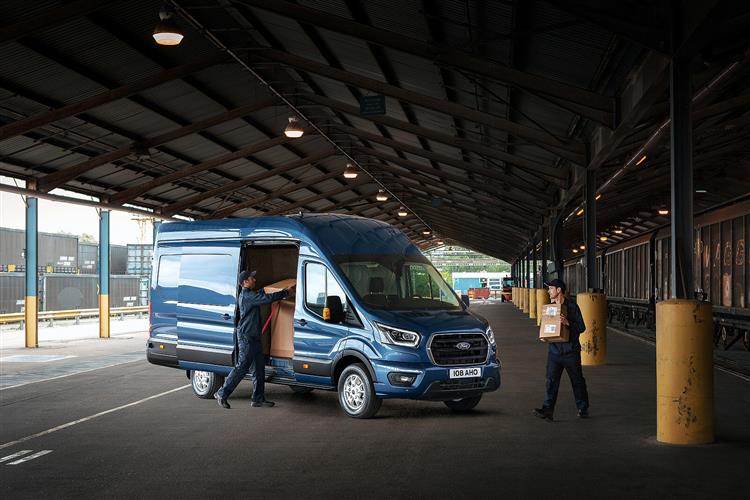 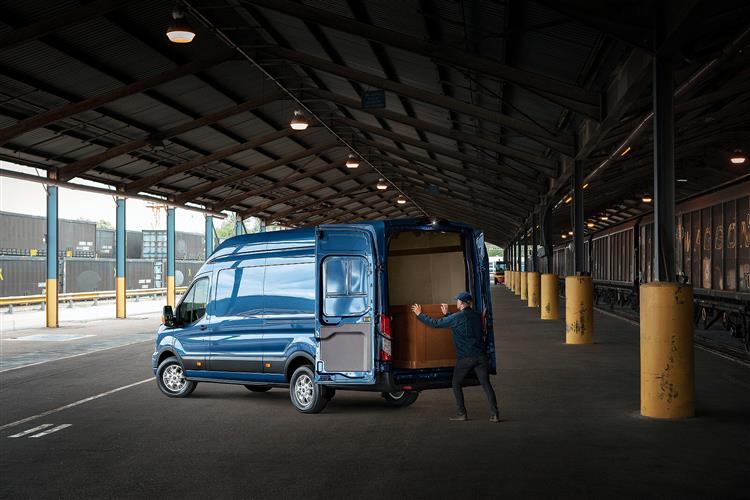 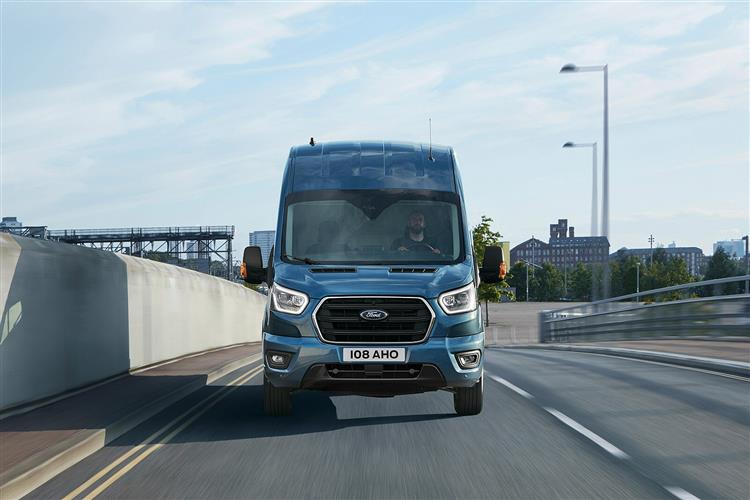 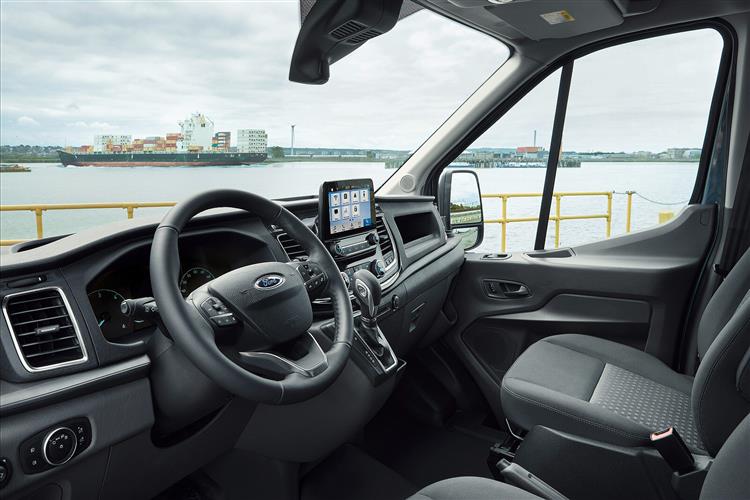 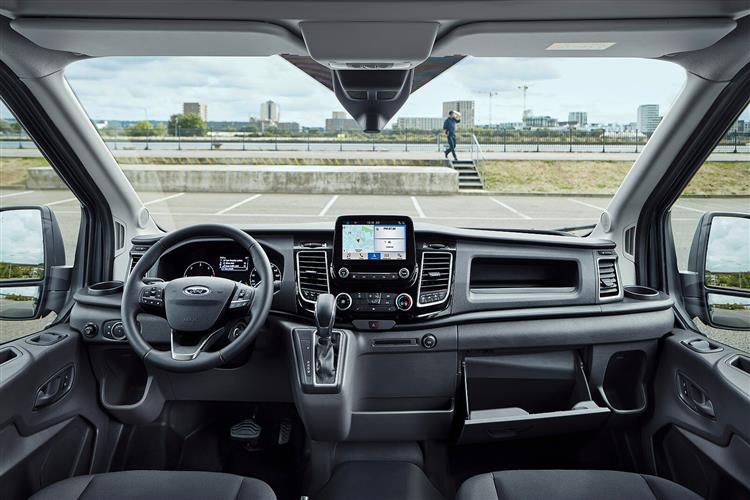 The Ford Transit two-tonne large van has evolved - there's even an electric version. Jonathan Crouch takes a look at what you can now expect from the brand's biggest LCV.

If the Ford Transit was a watch, you know it would be a Timex. That old strapline 'Takes a Licking But Keeps on Ticking' is just as appropriate to Ford's hardy perennial, a vehicle that has carved itself a massive share of the UK commercial vehicle market. This sixth generation version has been well received around the world as a global product - it's even sold in the US. Perhaps its one weakness from original though, lay with the relatively inefficient 2.2-litre diesel engines provided beneath the bonnet. No longer. Modern EcoBlue diesel technology (which can be had in 48-volt mild hybrid form) gets Ford back on the pace when it comes to efficiency returns in the large van segment - and not before time. Plus there's now a full EV option too. This design is the biggest version of the Transit breed, there to cover off large van rivals like Mercedes' Sprinter and the Renault Master. The Blue Oval brand these days has a separate smaller Transit Custom model to cover off Vivaro, Trafic and Transporter competitors in the medium-shaped van sector - a product we'll deal with separately. Here though, we look at the super-sized Transit, still a market leader.

Under the bonnet, the 2.0-litre Ford EcoBlue engine is offered in 105PS, 130PS, 170PS and 185PS power ratings. Alternatively, there's an E-Transit all-electric model, which uses a 68kWh battery that when fully charged, offers a driving range of up to 196 miles. It comes mated to a choice of two electric motor outputs - either 135 or 198kW. For the time being, most customers will continue to want the diesel unit, improved in recent years with greater low down torque and the option of EcoBlue Hybrid 48-volt mild-hybrid powertrain technology for front-wheel-drive and rear-wheel-drive Transit models. in addition to the six-speed automatic gearbox usually specified on front-wheel drive variants, rear-wheel drive Transits are available with a 10-speed automatic transmission featuring Adaptive Shift Scheduling, which can assess individual driving styles to optimise gearshift timings. As it was previously, the Transit is available in front-wheel drive, rear-wheel drive and all-wheel drive versions (plus there are also 'Trail' versions intended for rougher road use). Even in its standard forms, this Ford has been engineered to keep coming back after the worst abuse imaginable. Its body construction features high-strength and ultra-high-strength boron steels and in development, has covered the equivalent of nearly 3.4 million miles in testing in Europe and North America, with more than 250,000 miles of that total covered by actual Transit customers. Safety tests have been undertaken to ensure the van would behave in a safe and predictable manner when subjected to the worst kinds of impacts experienced in real-world use, one test involving striking a 150mm kerb at 30mph. Ford didn't say how much damage the inevitable Pot Noodle in the cup holder did to the vehicle's interior.

Bold, uncluttered and designed to be easy to clean, this Ford Transit's exterior features a tall, assertive three-bar grille and a smart lower front end, with front panels and bumper carefully profiled for optimum aerodynamics. High-series models feature powerful bi-xenon headlights and smarter LED daytime running lights with a distinctive Transit family signature. The cabin's been updated in recent times, primarily with the addition of Ford's latest SYNC4 central infotainment monitor, which is 12-inches in size and has twice the computing power of the previous SYNC 3 system. The instrument panel features lots of practical touches for drivers who use the cabin as a mobile office, including extensive stowage with three open-topped bins on the top of the dashboard. A device dock on lower series models enables drivers to mount both mobile phones and larger tablets. The hard-wearing seat fabrics have been subjected to Ford's toughest-ever abrasion tests, and comfort is further enhanced by smart seat designs featuring supportive foam padding and geometry for optimised support. Otherwise, it's as you were. The quality looks strong and there's been some budget devoted to actually making the dash look stylish rather than merely functional. The multi-adjustable steering wheel allows a decent driving position and the gear lever is located close at hand. There's a console that's loaded with buttons to control the various stereo and phone controls, helping you to take calls safely on the move. In fact, the biggest compliment you can pay is that it feels resolutely car-like.

The permutations of body styles are huge. As well as the normal van body, Ford will sell you a double cab-in-van, a Kombi, a chassis cab and a minibus. Overall, Transit customers continue to be able to select from a vast range of core variants, including front-wheel drive, rear-wheel drive and all-wheel drive drivelines, plus a low-height Skeletal chassis. We'll stick with just the panel van body here to save getting too complex. Here, you get a choice of three different wheelbases; L2 (Medium), L3 (Long), and L4 (Long Extended). There are also two roof heights on offer; H2 (Medium Roof) and H3 (High Roof). Ford offers three different trim levels: Leader, Trend and Limited. Ex-vat pricing starts at just under £30,000. Across the range, extra camera safety kit is now available and the brand is also offering its latest FordPass Connect on-board modem technology so that the cab of this van can fully function as a mobile office. The Transit's relatively car-like driving character is enhanced with the introduction of EPAS technology that helps reduce driver fatigue by adding more assistance while parking and manoeuvring, and enables technologies including Active Park Assist and Lane-Keeping Aid. Transit drivers are also able to choose from Selectable Drive Modes to match driving performance to conditions: all drivetrains feature Normal and Eco Mode. In addition, rear-wheel drive and all-wheel drive models benefit from Slippery Mode to aid traction on surfaces including ice and snow, and all-wheel drive variants feature Mud/Rut Mode. Rear-wheel drive models fitted with an automatic transmission offer Tow/Haul Mode for smooth power delivery when towing large trailers. Safety systems available include Active Park Assist, Cross Traffic Alert, Adaptive Cruise Control, Traffic Sign Recognition, Reverse Brake Assist and 360-degree Camera technology.

In recent times, the two-tonne Transit model's payload has been improved by up to 80kg. A 7,000kg gross train mass enables up to 3,500kg of towing capability. When Ford designed the cargo bay of this MK6 model, it revised the side-wall angles to make them more upright and raised the roof slightly to maximise useful space. Plus the brand made sure that all versions of this van would be around 300mm longer to ensure for a load length that would suit all standard-length pipes, boards, rolls of carpet, and ladders. A wide, high-grip step is integrated into the rear bumper making it easy to step into the cargo area and more convenient when loading by-hand. Side wall-mounted tie-down points help keep the load floor clear and are both DIN and ISO compliant, as is the full steel bulkhead that's fitted as standard. When you've got this much load space, side doors are vital and because they're often used a lot, the whole mechanism is built to maximise ease of use and durability. A double action release handle makes for smooth opening and closing, a 'positive check' latch secures the door when open and a warning beep sounds if the side door isn't shut or locked correctly. On to cost of ownership, an area where this model's latest EcoBlue diesel engines really score. Ford claims that fuel efficiency has improved by 13% in comparison to the older 2.2-litre TDCi unit, and it talks of CO2 emissions starting from as little as 157g/km. This engine also delivers extended 2-year/37,000 mile service intervals. You'll do better still of course, if you opt for the version of this engine with 48-volt mild hybrid technology. Your other option, as we mentioned in our 'Driving' section, is the all-electric 'E-Transit' which uses a 68kWh battery giving a driving range of up to 196 miles. That's assuming all the cells are fully charged, a process that can take as little as 34 minutes from a 115kW DC fast charger. An overnight full charge from a standard 230-volt AC supply takes just over eight hours.

In years gone by, the Transit in its largest sizes often relied heavily on its market positioning to maintain its Number One position amongst UK businesses. That's no longer valid - and Ford has long known it. Hence the effort that was put into improving this sixth generation two-tonne version, with a programme of improvements now completed by the addition of the all-electric E-Transit variants included within this revised model range. With an EV option in place, along with mild hybrid technology for the diesels and higher payloads across the range, it's hard to see much of a chink in this Ford's armoury: it's certainly the large LCV you simply have to consider if you're buying in this segment. The amount of work that Ford has put in to improve efficiency betrays an almost obsessive attention to detail, zeroing in not only on the things that matter to fleet operators, but also devoting equal attention to what counts for those who will drive this vehicle. Yes, you can buy cheaper vans in this sector, but at what cost? The Transit formula has been calculated to the nth degree and it works. Don't expect that to change anytime soon.