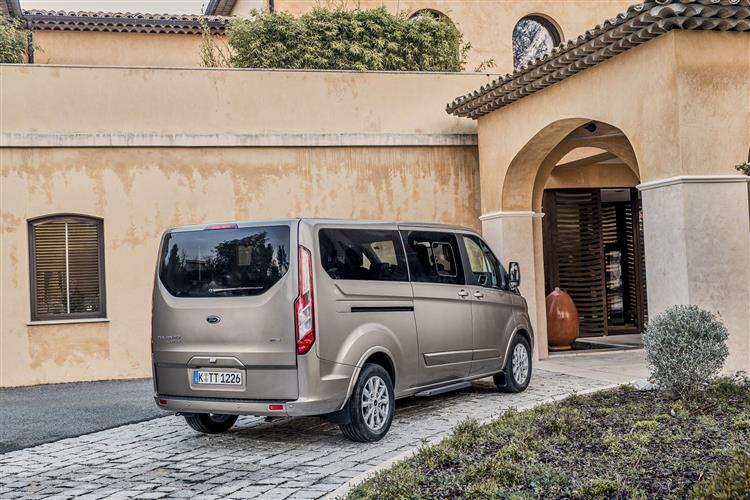 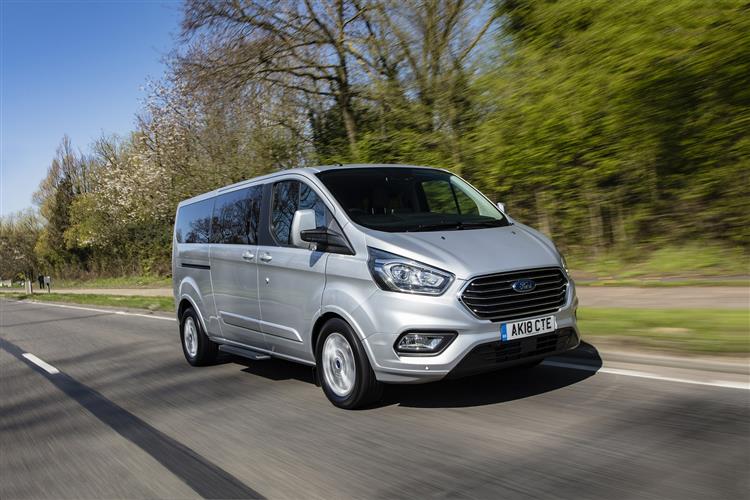 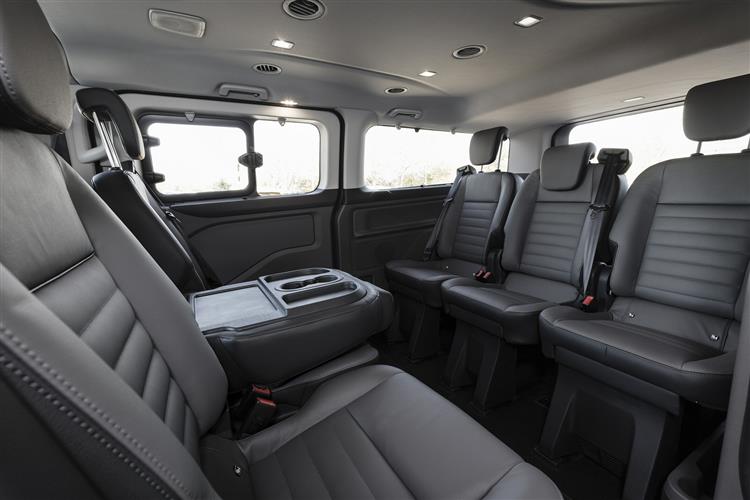 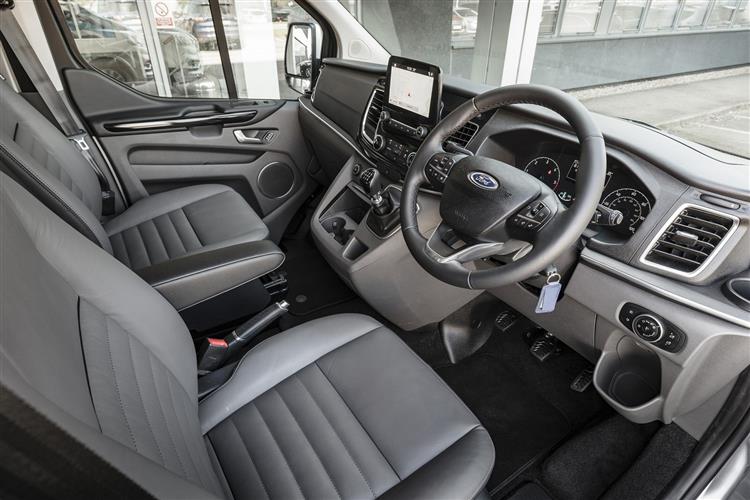 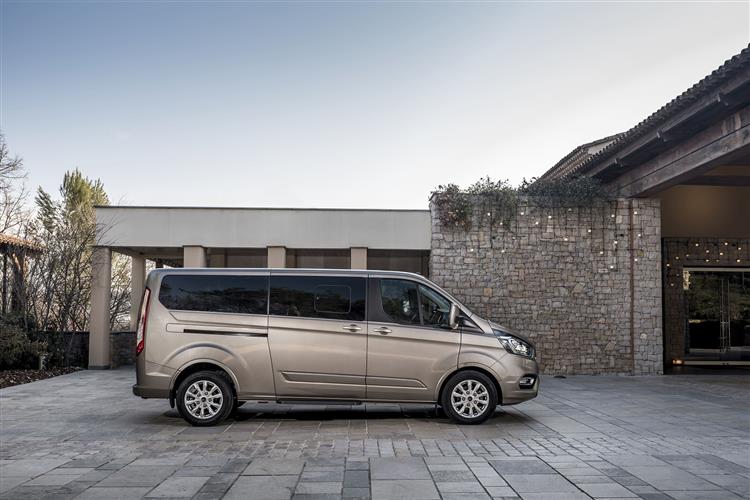 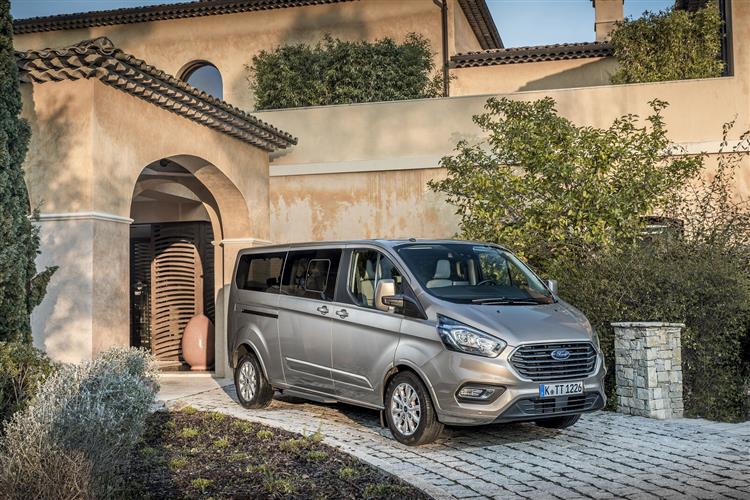 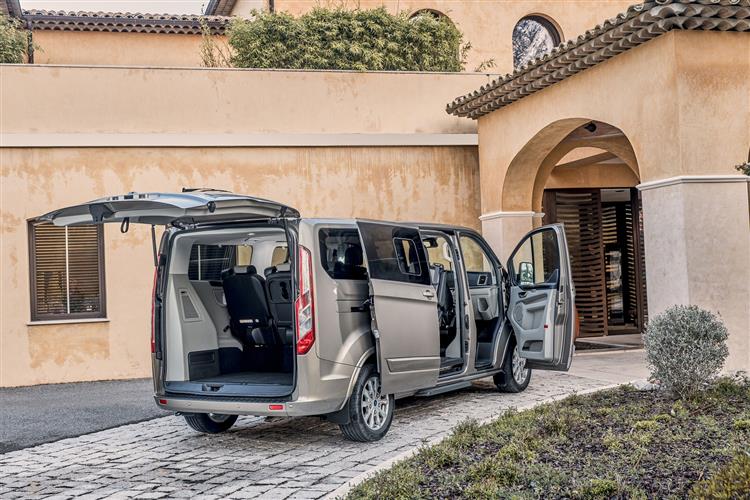 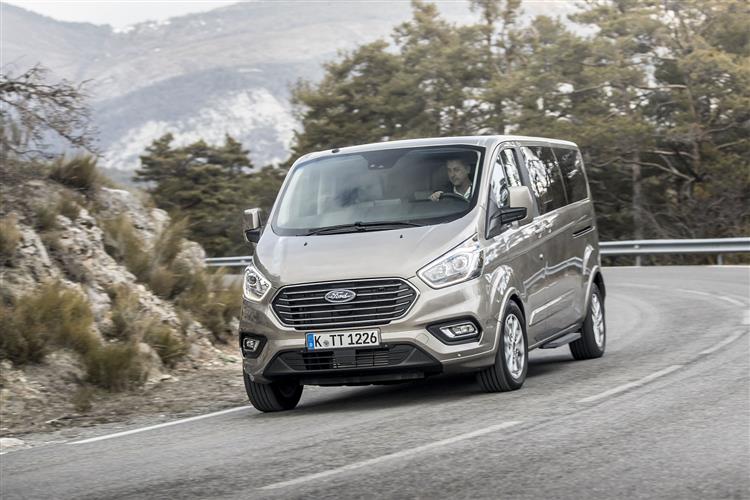 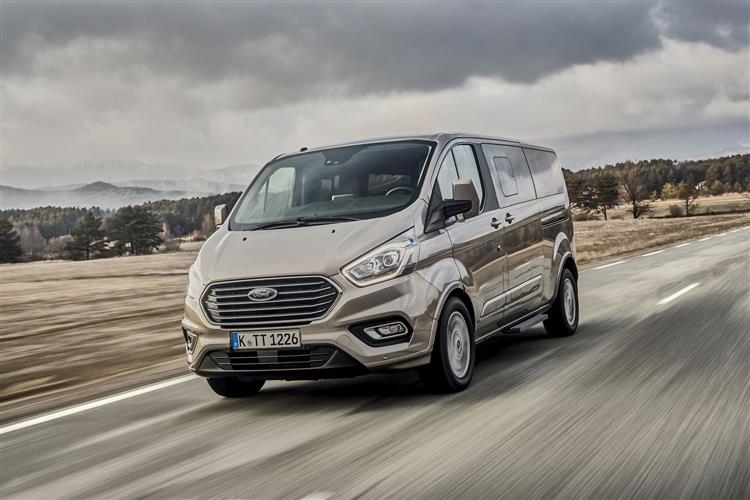 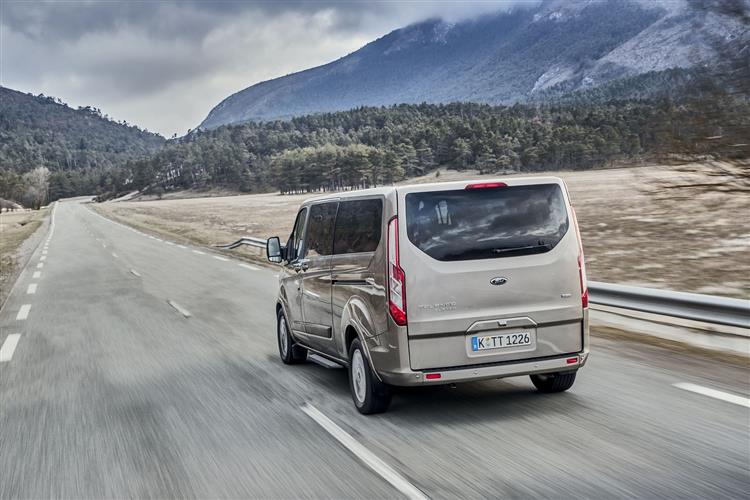 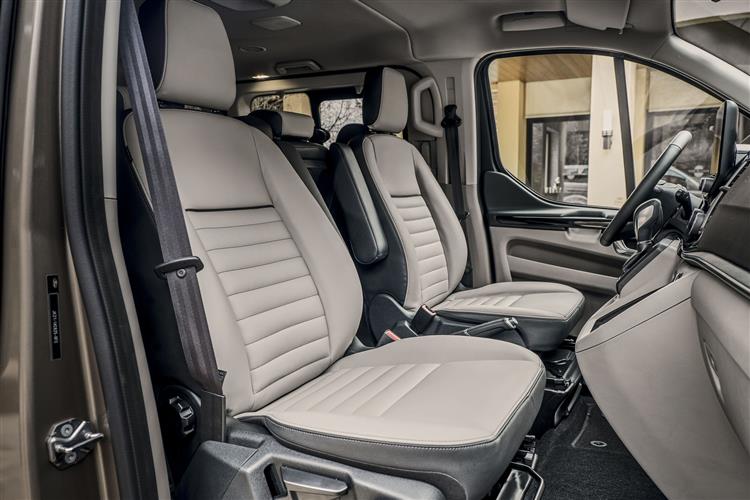 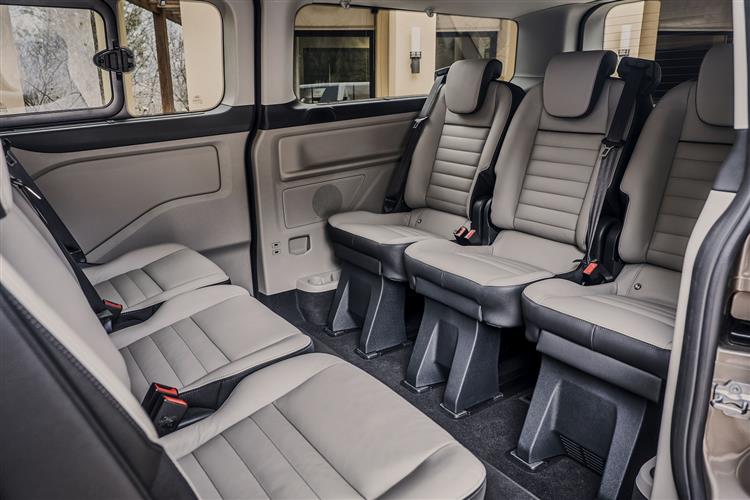 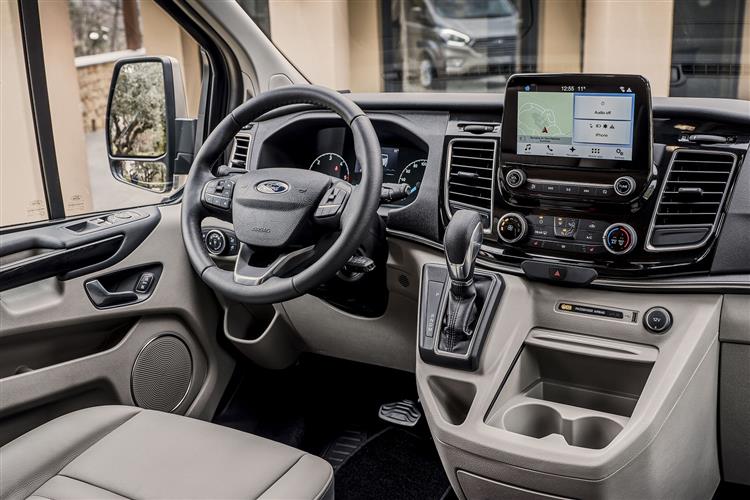 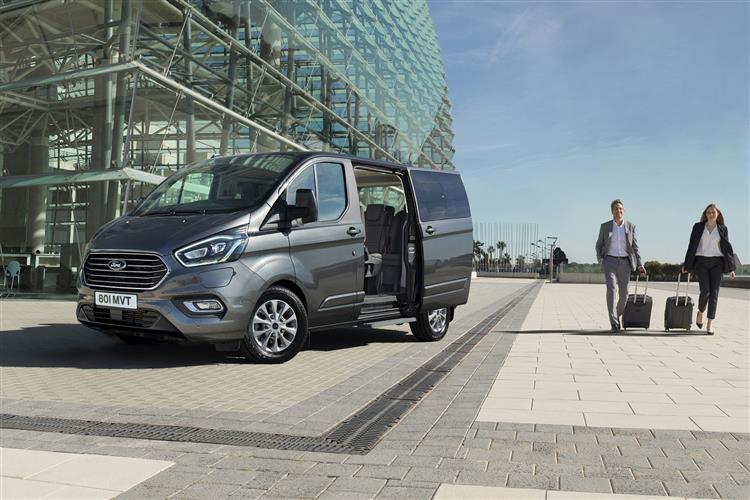 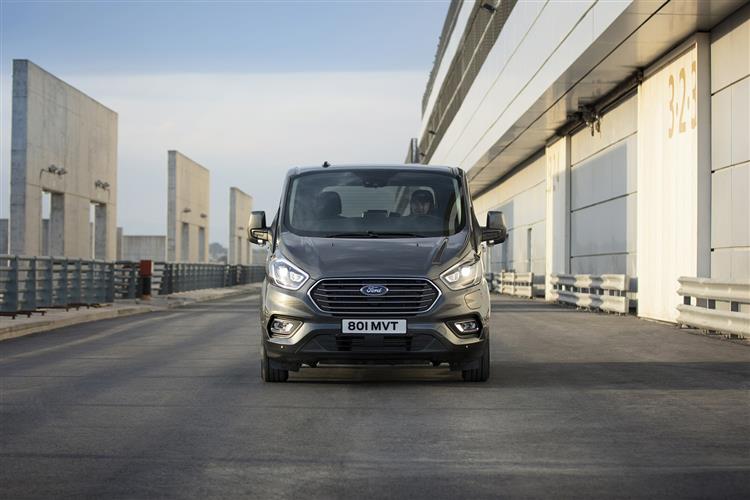 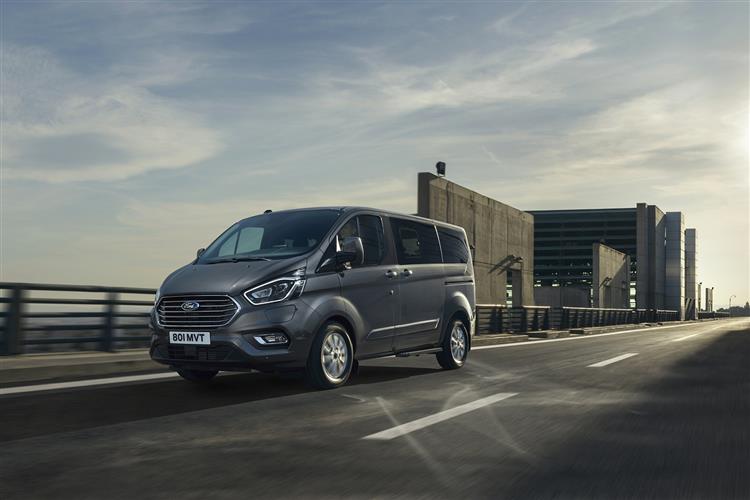 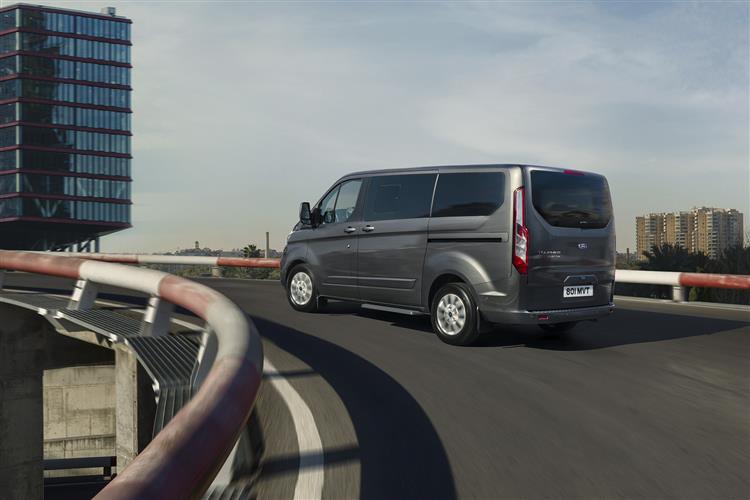 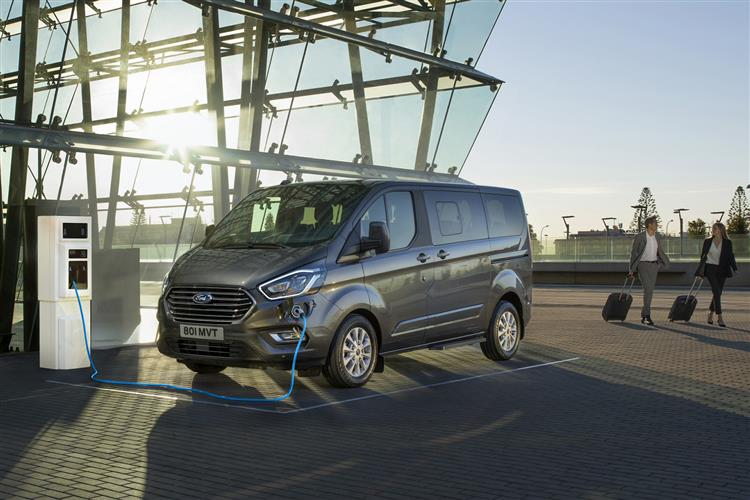 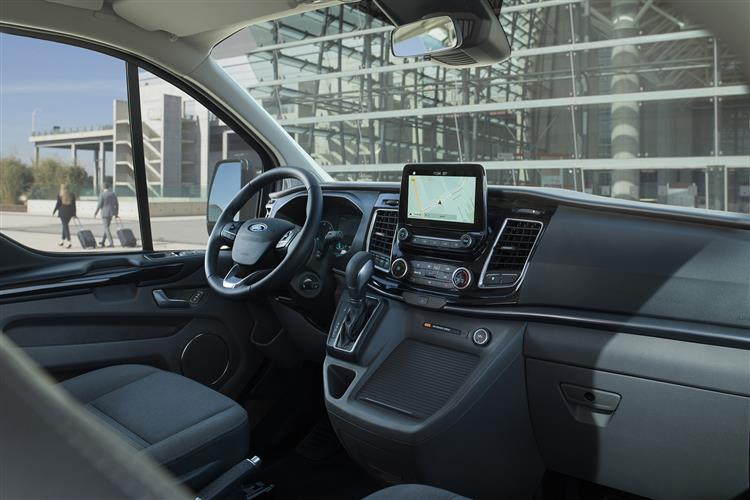 Ford's Tourneo Custom offers acres of space in a cost effective package. If you need something bigger than a Galaxy, this could be just the ticket. Jonathan Crouch drives it.

Ford has a reputation for making some of the best people movers in the business. Models like the S-MAX and the Galaxy both have their firm adherents but sometimes, buyers need a size beyond what even a Galaxy full-size MPV can deliver. If you're doing some heavy hauling and need a vehicle to fit that particular bill, the Tourneo Custom could be the answer. As you probably know, this is the passenger-carrying version of the Transit Custom van, also available in motorhome form as the Transit Custom Nugget. This design has been on sale since 2012, but it's been regularly updated over that time, most recently in 2019 when its 2.0-litre EcoBlue diesel engine gained the option of 48V mild hybrid mHEV tech and all kinds of FordPass Connect media features were added to the range. As before, this contender offers generous space and reasonable comfort for up to nine people beneath an exterior that while not doing too much to disguise its commercial vehicle roots, at least now looks as if it's been designed rather than arrived at. The Tourneo Custom is designed to be cost-effective for business use or as a safe, luxurious way of carrying family, friends and all their stuff and you can even opt for an L2 long wheelbase version if you've never really got round that 'people or luggage' predicament.

Whichever Tourneo Custom you choose, if you pop the bonnet you'll be greeted by a 2.0 litre EcoBlue diesel engine, mated to a six speed manual transmission and driving the front wheels. So far, so simple. After this it gets a little more involved but nothing that'll require too much homework. The core engines offer either 105 or 130PS outputs and further up the range, there are 150 and 170PS versions of this unit available too. If you stick with manual transmission, all but the top 170PS variant can be had with the option of 48-volt mild hybrid technology too, though it's a pity you have to pay extra for it. Ford isn't offering Tourneo Custom buyers the 1.0-litre Plug-in Hybrid petrol powerplant you can have in the Transit Custom van. Engine refinement at idle from the 2.0 EcoBlue diesel certainly isn't class leading, but you'll never be kidding your passengers that they're in a Lexus anyway. There's the option of a six-speed SelectShift automatic transmission, but if you do without it, you'll have the chance to specify a unique-to-segment rear air suspension system that delivers a supple, controlled and level ride across a wide range of load conditions. The chassis has been tuned for British conditions with beefy front and rear axles, bringing decent levels of stability and control. The stiff body structure meanwhile, allows the suspension to do its work effectively without the usual van-like intrusions. There's even Torque Vectoring Control which reacts to the road surface 100 times per second. Using this information, it balances the amount of power delivered to each of the two front wheels, maximising grip and sharpening handling. And you thought all that was just for sports models.

The Tourneo Custom makes no attempt to hide its LCV roots, but as van-based buses go, it's a reasonably handsome thing, with many of the styling cues used in Ford passenger cars. At the front, there's a high-mounted trapezoidal grille and slim headlamps that flow neatly into the vehicle's muscular shoulder line. At the wheel where you sit quite high, the brand has redesigned the instrument panel in recent times and it now offers a user-centric layout influenced by consumer interactions with smart devices and tablets. To provide customers the ultimate flexibility in configuring and using the rear cabin, the Tourneo Custom is one of the few vehicles in its segment to offer six individual rear seats, with the ability to arrange the two rear rows in conference format for enhanced interaction between passengers. Or you can set the cabin up with two rows of three seats facing forward. The individual seats can each be folded flat, tumbled, stowed in a multiple locations or removed completely to maximise the luggage area or meet special business or lifestyle requirements. You can have your Tourneo Custom configured as a seven, eight or nine-seater. Either way, you can also choose an L1 (short wheelbase) or an L2 (long wheelbase) version. The L1 version is 4.97m in length, while the L2 is 5.34m. The L2's extra 370mm translates into extra luggage space behind the third row of seats. As a result, with all the rear seats removed, it offers up to 6.8 cubic metres of luggage space, compared to the L1's already generous 6.0 cubic metres. Because it's less than two metres in height, the Tourneo Custom fits within most car park limits.

Tourneo Custom prices start at around £45,000 and as before, the line-up continues to also offer both eight or nine-seat configurations and is available with a choice of short wheelbase and long wheelbase versions. All versions use a 2.0-litre EcoBlue diesel engine, but you can have it with various outputs and in a choice of standard or mHEV mild hybrid forms. That base price we mentioned gets you the utilitarian 'Shuttle Bus' version, which only comes with nine seats and can be had with either 105PS or 130PS outputs, the latter with the option of 6-speed automatic transmission. Otherwise, your Tourneo Custom will come with eight seats: there's a choice of 'Zetec', 'Titanium', 'Titanium X', 'Sport' and 'Active' trim levels. From 'Titanium' level upwards, the engine choice widens to include 150PS and 170PS versions of the 2.0-litre EcoBlue unit - and these are the only options if you choose top 'Sport'-spec. As for equipment levels, well things are pretty basic with the Shuttle Bus derivatives, but the eight-seater versions do OK: base 'Zetec'-spec gets you air conditioning, 16-inch alloy wheels and auto headlamps. 'Titanium' adds heated seats, sun blinds, body mouldings and 17-inch wheels. 'Titanium X' includes High Intensity Discharge Headlamps, a rear view camera and some extra safety kit; 'Sport'-spec gets body stripes, unique 17-inch alloy wheels and partial leather interior trim; and 'Active' trim assumes an SUV vibe, with roof rails, extended-length running boards and special bumpers. Across the range, you can have 'FordPass Connect' on-board modem technology - standard for both the 4-inch and available 8-inch touchscreens. This enables each occupant to benefit from Wi-Fi connectivity and a range of features can be accessed via the FordPass mobile app. These aim to make the vehicle ownership and operating experience easier and more productive, including Vehicle Status access, a Vehicle Locator, a Remote lock/unlock function and, for automatic variants, Remote Start.

The big change with this revised Tourneo Custom model in recent times has centred around the introduction of optional EcoBlue Hybrid 48-volt mild hybrid technology mated to the cleaner EcoBlue diesel unit introduced in 2018. Ford says that the mHEV mild hybrid option, offered on nearly all the engines in the range but only available with manual transmission, has been 'optimised to enhance fuel efficiency'. So how does it work? Well, a belt-driven integrated starter/generator (BISG) replaces the standard alternator, enabling recovery and storage of energy during vehicle decelerations, and charging a 48-volt lithium-ion air-cooled battery pack. The BISG also acts as a motor, using the stored energy to provide torque assistance to the engine under normal driving and acceleration, as well as running the vehicle's electrical ancillaries. The EcoBlue Hybrid's advanced Auto Start-Stop technology operates in many situations, including when the vehicle is stationary in gear, and when the vehicle is coasting to a stop. The driver can adjust the coasting speed at which Auto Start-Stop operates, between 7mph and 12mph. It all sounds very impressive, but take a look at the stats and you might be disappointed that the mHEV system doesn't make more of an efficiency difference. Fitted to the base 105PS model, it improves the combined cycle fuel return from 42.8mpg to 44.1mpg and the CO2 reading from 200g/km to 194g/km - and the differences are similarly slight further up the range. For a greater efficiency jump, you'd really need Plug-in Hybrid powertrain, which Ford offers to customers of this vehicle's Transit Custom van showroom stablemate but doesn't make available to this People Carrying version of the same design.

Vehicle manufacturers often seem so intent on finding minuscule pieces of white space between niches that they sometimes take their eye off what can be neglected but potentially lucrative existing sectors. Perhaps Ford has been guilty of that in the past, but with the Tourneo Custom, it's more than made up for that, maximising its opportunities in the super-large section of the MPV sector and reaping the reward with growing sales of this model over the last few years. If you've needed something that's bigger than a Galaxy but don't want to spend over £60,000, there actually aren't all that many segment options on offer above humble crew bus fare. But the Tourneo Custom provides a surprisingly attractive one and has significantly improved its proposition since original launch. Properly specified, it can even have a bit of style and, should you want it, some decent interior appointments. We're a little disappointed that the much-trumpeted mild hybrid tech doesn't deliver more of an efficiency benefit. And that the PHEV powertrain offered in the Transit Custom hasn't made it to this passenger-carrying derivative. And we'd like to have seen pricing kept at slightly more manageable levels. But otherwise, we've found much to like with this spacious, practical Ford bus. For big families, it could be the answer they never knew existed.