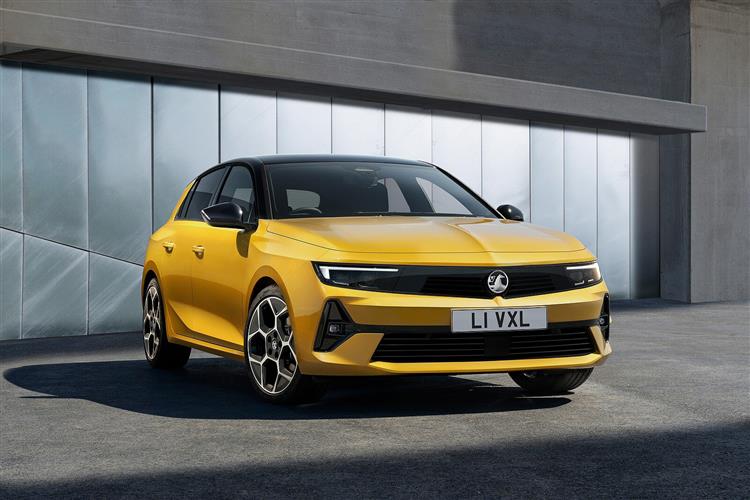 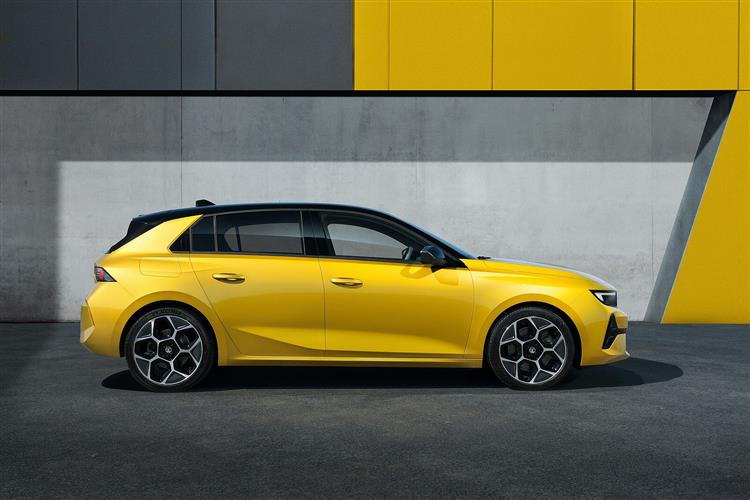 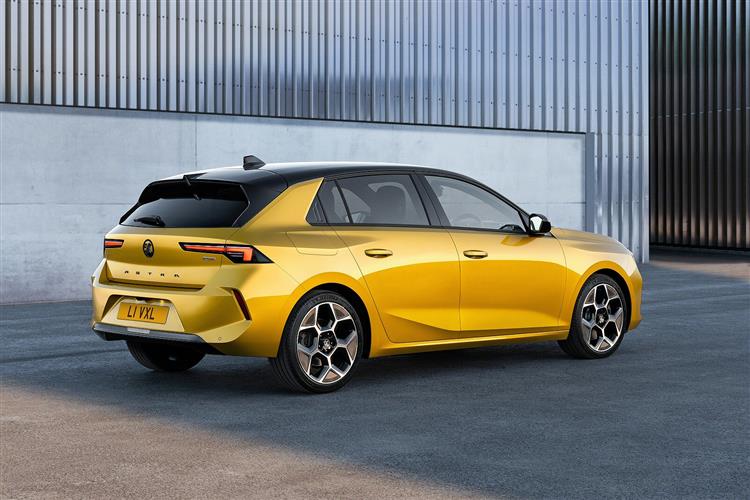 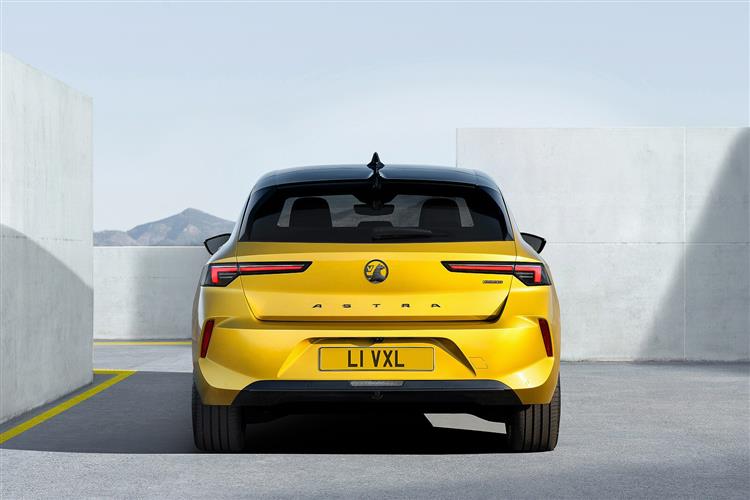 For years, Vauxhall has struggled to make its Astra an engaging showroom choice in the family hatchback segment, but perhaps it's time has come. This eighth generation model is the penultimate model in the brand's line-up to move away from the platforms of previous company owner General Motors and adopt the Stellantis Group EMP2 underpinnings and engines used in similarly-sized Peugeots and Citroens. But as you can see from the pictures, it retains very much its own identity. And yes, you'd notice one in the showroom. Which is a definite step forward from an era where an Astra was a choice you made based on price or efficiency. But very rarely on heart or desire. Yes, underneath, it's basically the same as a Peugeot 308 or a Citroen C4; but you feel here that Vauxhall is at last reinventing itself as a more interesting brand with cars like this one. Let's take a closer look.

We've never had an Astra with Stellantis Group Peugeot and Citroen-derived engines. We have now. This change, necessitated by the switch to this MK8 model's EMP2 platform, doesn't bring any particular advantages in performance or economy over the previous GM units but it does at least allow this model line to offer an electrified option. Most of the engines are of the conventional kind though; for its various brands, Stellantis hasn't bothered with mild hybrid tech you'll find on competing Ford, Mazda and VW Group models. Which means that most Astras will be sold with a three cylinder 1.2-litre petrol turbo unit - there are 110 or 130PS options. A four cylinder 1.5-litre 130PS diesel is available too. Whatever your choice, it'll come with a 6-speed manual gearbox, with an 8-speed auto an option on the 130PS models. This Astra's electrified engine technology comes in the form of plug-in hybrid PHEV tech, mating a four cylinder 1.6-litre petrol turbo unit with a 110PS motor embedded in the 8-speed auto gearbox. There's a choice of two versions of this 'Plug-in HYBRID-e' powertrain, though to start with, we're only getting the one with a combined output of 180PS (the other raises the total to 225PS). Either way, expect an all-electric driving range of around 43 miles. Automated driver assistance systems include adaptive cruise control, which increases or decreases speed to follow the vehicle ahead and can brake to a standstill if necessary. With the automatic transmission, driving resumes automatically thanks to a Stop & Go function. More unusual in segment terms is the standardisation of a head-up display; and the availability of intellingent 'matrix'-style 'IntelliLux LED headlights, here with clever 'Pixel Light' technology.

Did you ever think an Astra would look like this? Present and correct in both hatch and estate versions of this more striking looking eighth generation model is the 'Visor'-style front end lately adopted for the brand's Mokka and Grandland SUVs. It's flanked by sparkling LED headlights, optionally upgradable to 'Intellilux' status, which gives them 168 individual LED elements. There are also larger wheel arches housing bigger rims of 16 to 18 inches. Size-wise, at 4,374mm long and 1,860mm wide, this MK8 Astra is fractionally longer than its predecessor, but sits 15mm lower. It's radically different inside too, thanks to the introduction of Vauxhall's 'Pure Panel' design, which banishes buttons and is based around sophisticated centre dash and instrument screens. The centre monitor incorporates 'Apple CarPlay' and 'Android Auto' smartphone-mirroring and there's the option of a Head-up display. There's no longer a conventional handbrake - just a small switch; and models fitted with an automatic gearbox get a sliding selector in place of the usual stick, which frees up space for extra storage and an additional cup holder. A 13mm increase in wheelbase length has improved space for rear seat passengers. And provides for a larger 422-litre cargo area, which offers an adjustable height base. The alternative Sports Tourer estate version offers 548-litres of space.

The previous seventh generation Astra had the virtue of being priced significantly under the levels of its direct competitors. Vauxhall's current owners have no interest in continuing that policy, so this MK8 model is pitched in the same £23,000-£35,000 price bracket as most of its direct rivals. Obviously, there'll be a slight premium on those figures if you want the alternative Sport Tourer estate version, rather than the standard five-door hatch. To start with, rather refreshingly for a Vauxhall, there are just three trim levels on offer - 'Design', 'GS Line' and 'Ultimate'. With all of them, you can expect plenty of equipment for the money, with standard features like full-LED headlights, digital instrument dials, a head-up display and standard 'Apple CarPlay' and 'Android Auto' smartphone-mirroring for the centre dash screen. You'll now be able to specify your Astra with larger wheels - up to 18-inches in diameter - and even an optional 2-tone paint finish. The front seats, developed in-house, are certified by the AGR (a German organisation who campaign for healthier backs) and claim to be exceedingly comfortable for long journeys. The driver is supported by state-of-the-art assistance systems ranging from the semi-automated 'Intelli-Drive' assistance system to the 'Intelli-Vision' 360-degree camera. And the brand expects the intelligent 'Intellilux' headlights to be frequently specified option. These use state-of-the-art LED pixel lights. There's also extended traffic sign recognition, rear cross-traffic alert and active lane positioning, which keeps the car in the middle of the driving lane.

The Peugeot and Citroen-derived PureTech and BlueHDi engines in use here have already proven to be extremely efficient in other Stellantis Group cars we've tried them in and of course the same is true of this Astra. Think around 55mpg on the combined cycle and 128g/km of CO2 for the PureTech 130 petrol engine; and about 65mpg and 117g/km of CO2 for the 1.5-litre BlueHDi 130 diesel. These figures are helped by this 8th generation Astra is relatively light weight, gained through the use of high-tech materials such as the latest thermoplastic's. Low rolling resistance tyres also play their part. Combustion engines though are soon to be no more in Vauxhalls - the brand will sell only EVs from 2028. For the time being though, the Astra's electrification is limited to PHEV 'HYBRID-e' tech. Opt for either of the two Plug-in Hybrid variants and as we mentioned in our 'Driving Experience' section, up to 31 miles of battery running is claimed in each case, while CO2 is rated at around 25g/km. From a household plug, both PHEV versions will be replenished in just over seven hours. You'll find 3.7kW single-phase charging supported as standard, which means recharges will take three hours and 50 minutes. A 7.4kW on-board charger is available as an option and plugged into a wallbox, the battery will take one hour and 50 minutes to be topped up. The plug-in hybrid Astra variants offer a thermal pre-conditioning function too.

This eighth generation Astra won't sell in the kinds of numbers we saw with earlier models, but that's to be expected. These are different times. And this is a very different Astra. A better one? We think those owners still loyal to this model line, not tempted away by SUVs or Korean rivals, will think so. There's just enough brand identity here to give you reasons to want one. And if the way the UK dealer network has sold the similarly-parented Corsa supermini is any guide, the value proposition might be tempting too if you're shopping around in this segment. We thought last versions of the previous generation model were very under-rated, but they had become segment also-rans. This car gives reason to add the Astra to your family hatch shopping list once more. And maybe even to put in asterix next to it.