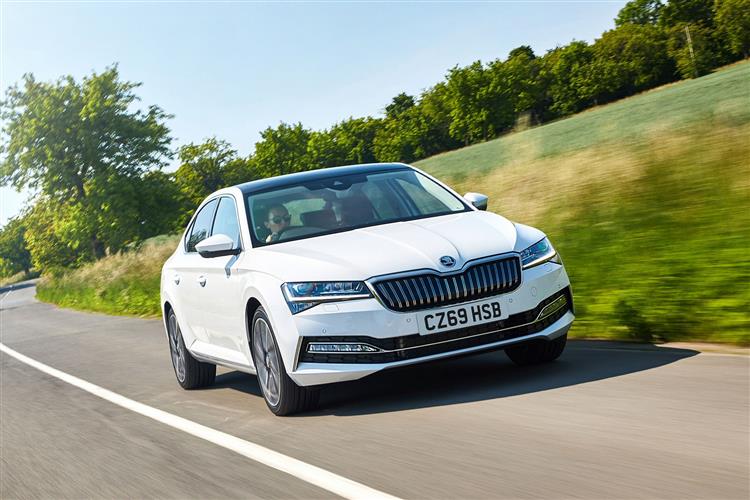 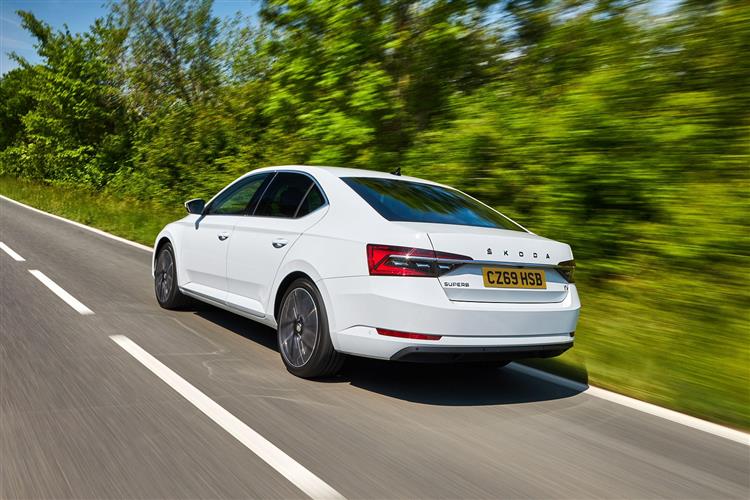 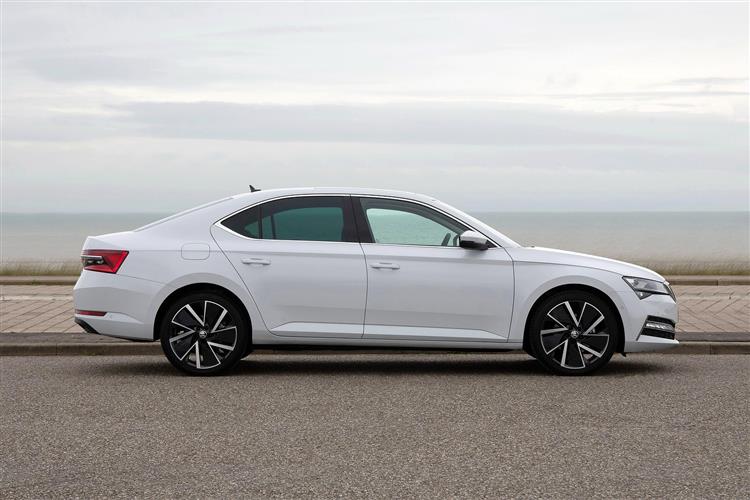 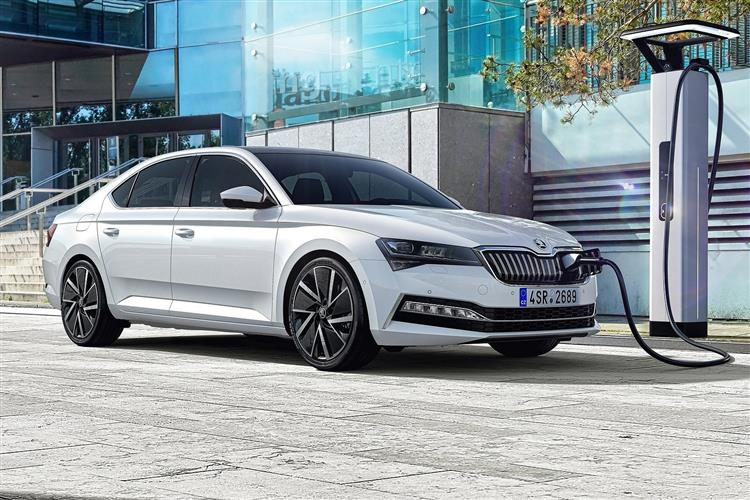 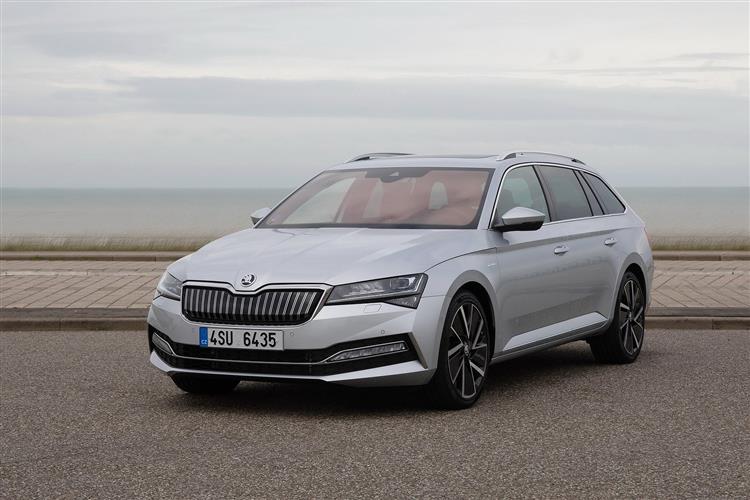 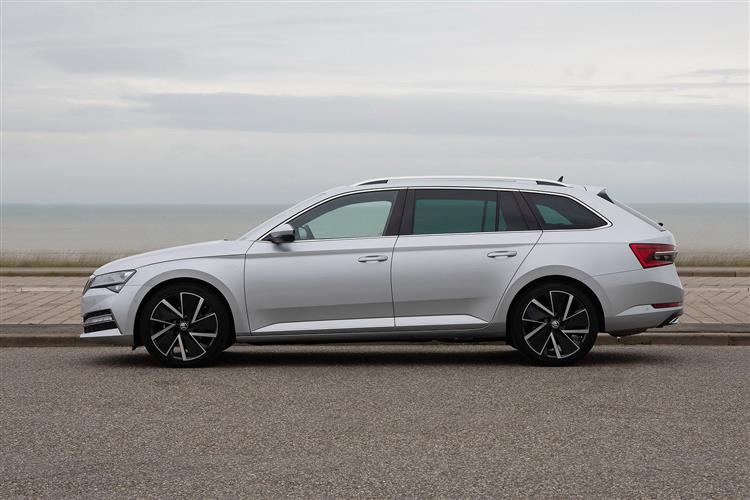 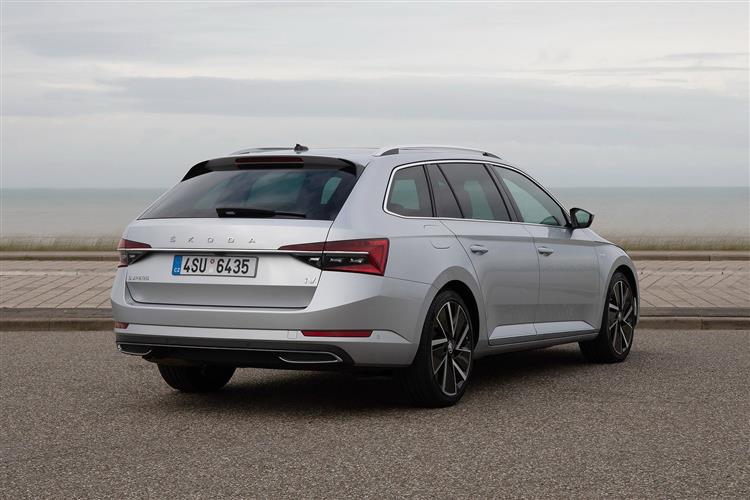 In the future, we're going to see plenty of electrified models from Skoda, but this was the first, the Superb iV plug-in petrol hybrid. In case you're wondering by the way, 'iV' stands for 'innovative Vehicle'. This car was launched in the Autumn of 2019 but it's actually surprising that we didn't see it earlier because it's based on all the same mechanicals used by the Volkswagen Passat GTE - which has been on sale since 2016. Still, better late than never and in true Skoda style, the Superb iV takes a VW package, then adds value and a lower price to it. And in this case, more interior space and some extra 'Simply Clever' interior features too.

The Superb iV features the old 1.4 TSI petrol unit that used to be offered in conventional form in the range (that's now been replaced by a 1.5-litre TSI powerplant). With this plug-in model, the mechanical recipe is just as it is in this car's cousin, the Volkswagen Passat GTE. So that relatively elderly engine (and an equally old-tech 6-speed DSG gearbox) are wedded to a very modern slice of electrification, namely an 85kW electric motor (which boosts total system output to 218PS) and a 13kWh battery which, when fully charged, can provide up to 35 miles of all-electric WLTP-rated driving range. According to circumstance, this set-up swaps between electric and petrol - or seamlessly combines them. And you can drive this part-electric variant in either a frugal 'Hybrid' setting or a press-on 'Sport' mode, the latter enabling a potential 62mph sprint time of 7.8s en route to 138mph. The days are long gone when a Superb tackled twisting roads with all the agility of a Channel ferry. The installation of a stiff, sophisticated Volkswagen Group MQB platform into this third generation model in 2015 delivered a level of handling prowess broadly comparable with its close cousin, the Volkswagen Passat. Which means that though this Skoda remains very much comfort-orientated, it's these days surprising capable should the need arise for you to push it along a bit.

As with any ordinary Superb, the iV plug-in model offers a body style choice between hatch and estate. Visual changes to this revised version of Skoda's third generation Superb are relatively slight; you'll need to be a brand enthusiast to note the smarter, narrower full-LED headlamps and tail lights, plus the restyled bumpers and revised badging. The front grille now bears double slats, is larger and protrudes a little further down into the front bumper. At the rear, a horizontal chrome trim strip, which connects the full LED tail lights and the new 'SKODA' block lettering, might catch the eye, as might the smarter 18 and 19-inch wheel designs. Inside, if you owned an earlier version of this MK3 model, you might notice this revised car's extra chrome highlighting, the revised seat covers and the extra decorative trims for the centre console and dashboard. Added 'Simply Clever' touches include a space organiser beneath the boot floor. And a 'Phone Box' system that allows for inductive handset charging. A fully digital 'Virtual Cockpit' instrument display screen is now optional too, replacing their usual dials. As ever with a Superb, space for rear seat passengers is class-leading thanks to this MK3 model's lengthy 2,841mm wheelbase. The boot capacity of this plug-in model falls quite a lot over what you'd get in a conventional Superb model but it's still pretty decent. For the Hatch iV variant, it's 485-litres - or 510-litres for the Estate version.

Skoda rather ambitiously thinks that this iV plug-in variant will take around 30% of total Superb sales, even though this powertrain is only available with the top three trim levels at hefty pricing in the £35,000-£39,000 bracket, figures that these days there's no government assistance to slightly reduce. The spec options in question are 'SE L', 'Sportline Plus' and top 'Laurin & Klement'. Even the 'SE L' model comes with quite a lot. Tick off privacy glass and full-Matrix LED headlamps with LED daytime running lights and 'Dynamic' scrolling indicators, plus cornering front fog lamps. 'SE L' trim also gets you 18-inch 'Zenith' wheels, an electrically-operated tailgate, headlamp washers and keyless entry. Inside, 'SE L' spec entitles you to full leather upholstery with contrast white stitching and both heat and power adjustment for the memory foam front seats. Plus there's a colour multi-function trip computer and a 'Drive Mode Selection' system with 'Comfort', Normal', 'Sport', 'Eco' and 'Individual' options. All Superb iV variants feature the very complete 'Amundsen' centre-dash infotainment screen package with built-in navigation. There's also an 'Adaptive Cruise Control' system that incorporates a clever 'Predictive Cruise Control' feature which uses images from a windscreen camera, along with navigation data, to adjust the car's speed ahead of bends and speed restrictions.

If you've read other sections of this report, you'll know that this Superb iV model mates a 1.4 TSI petrol engine with an 85kW electric motor powered by a 13kWh battery which, when fully charged, can provide up to 35 miles of all-electric WLTP-rated driving range. As a result, it's quite likely that with a typical commute, a Superb iV owner would only need to actually visit a fuel station every month or two. Assuming you install the 3.6kW wallbox charger in your garage, the battery can be replenished from empty in three and a half hours. From an ordinary household plug, the charging time figure rises to around 5 hours. The result of all this technology is a WLTP combined cycle fuel economy figure of up to 156.9mpg and a super-clean NEDC-rated CO2 output of up to 34g/km, these readings based around use of this variant's most frugal 'Hybrid' driving mode. As with any plug-in model, the official fuel return is a fantasy figure, but that impressive CO2 reading means a low VED band B and significant company car tax savings. A slight downside with this variant lies with the fact that the battery's positioning under the rear seat necessitates a reduction in fuel tank size from 66 to 50-litres, but even so, you should still be able to manage around 550 miles between refills.

To justify its continued existence in the Skoda line-up, the Superb is a model that needs to diversify a little - and this iV plug-in variant represents a good start in that direction. Yes, the quoted fuel and CO2 figures would be virtually impossible to achieve in real-world motoring, but then that's the case with any plug-in or EV model you care to name. What's important is that the government believes them. Hence the way that this model can deliver impressively low Benefit-in-Kind taxation ratings for its (mainly business-orientated) customer clientele. We're a little disappointed that prices are a little on the high side. Yes, technology like this costs, but if the brand had offered the iV drivetrain with lower-order specs, then this plug-in model could have been offered much closer to the £30,000 price point - which would have usefully widened its appeal. Still, if that's not an issue, you'll find plenty to like here.