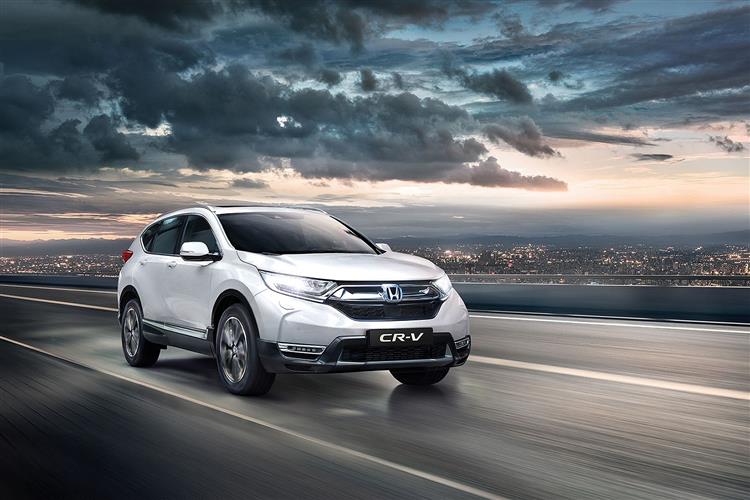 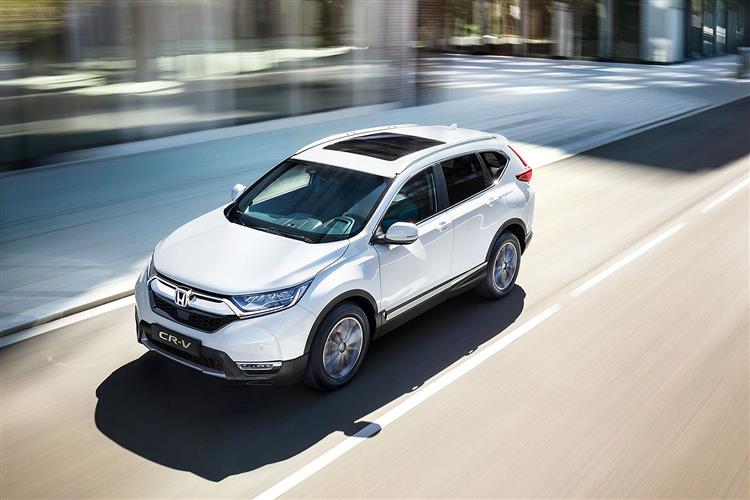 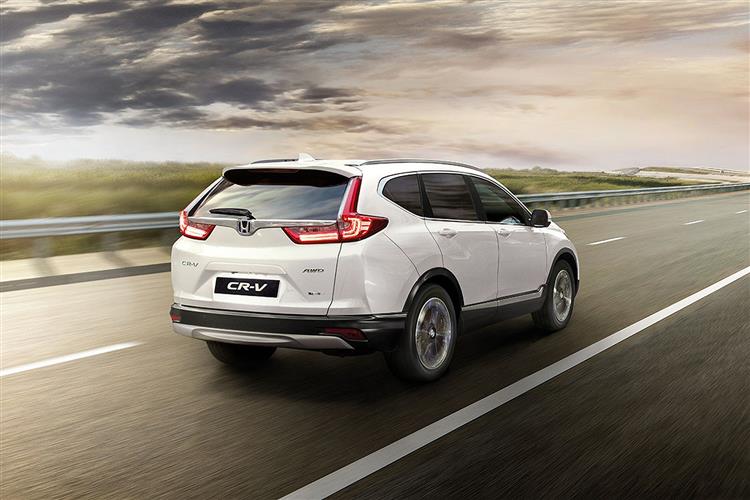 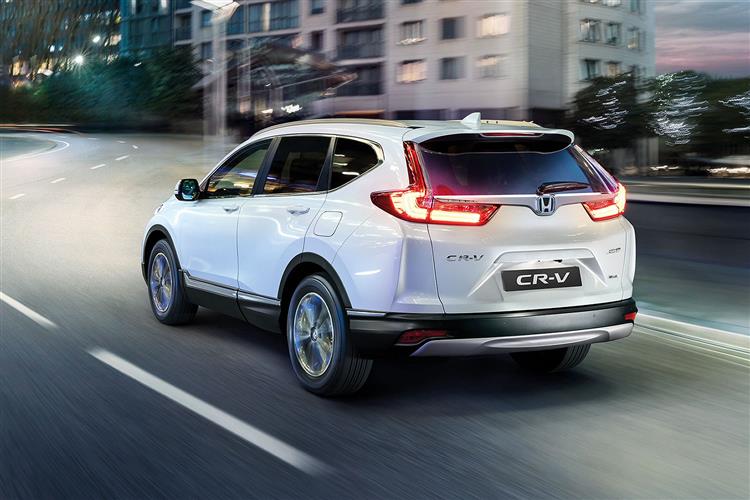 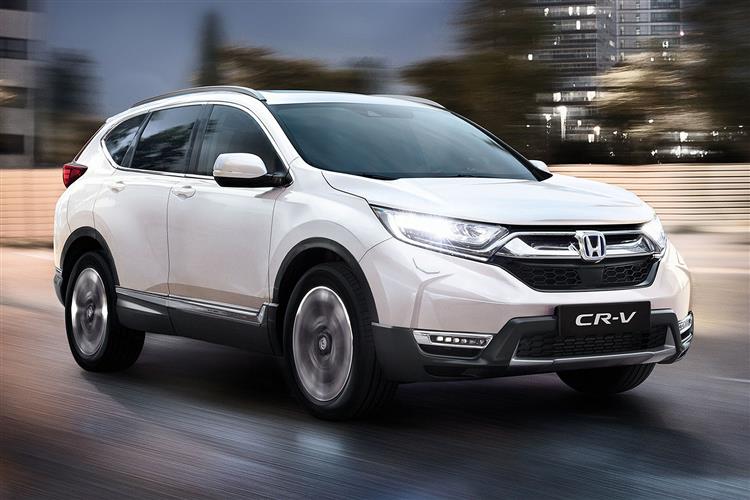 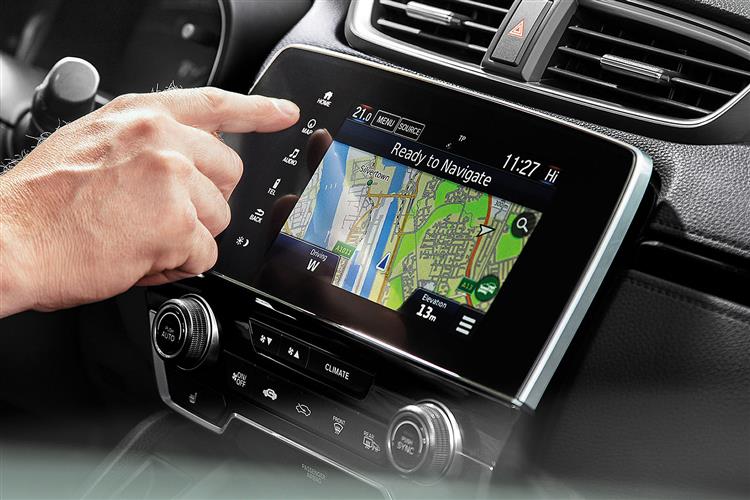 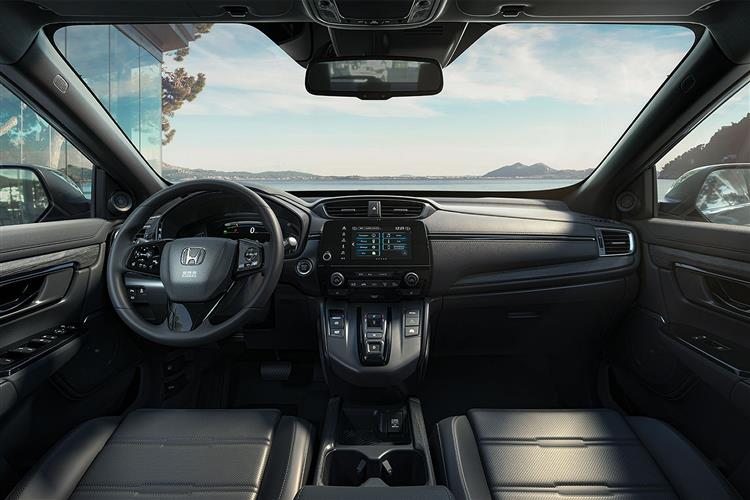 The improved version of the fifth generation Honda CR-V, now only offered as a Hybrid, makes plenty of sense, thinks Jonathan Crouch

Pretty soon, non-electrified engines will be a thing of the past. They really are in the Honda CR-V range, now entirely based around the brand's e:TECHNOLOGY i-MMD full-Hybrid engine. The CR-V has never been a contender that's jumped out at you from the spec sheet. No. You have to drive it. Use it. Fill it with family. Many of those experienced in doing just that probably won't even look at the alternatives before replacing their second, third, fourth or early fifth generation CR-Vs with this improved MK5 model. It does after all, according to its maker at least, offer a depth of engineering that many other rivals just don't have - and always has, ever since the original version of this 'Compact Recreational Vehicle' pretty much invented its segment back in 1995, with subsequent models in 2002, 2007 and 2012 before this fifth generation design was introduced in 2018, then improved two years on to create the car we have here.

If you're already familiar with this car's self charging full-Hybrid i-MMD petrol / electric engine, the main change we need to brief you one relates to suspension updates with this revised model. Honda says the damping has been tweaked for more linear handling responses and to provide what it calls 'increased low longitudinal rigidity for optimised ride compliance'. We think that means it handles the bumps slightly better and doesn't roll as much through the corners. Otherwise it's just as the hybrid model was before. Thanks to a combination of electrification and a larger-capacity 2.0-litre i-VTEC petrol engine which together produce 315Nm of torque, progress in this model is relaxed. Something further aided by the fact that the non-negotiable auto gearbox you have to have with hybrids in this case ditches a CVT 'rubber band' transmission for a proper fixed-gear set-up that allows a direct connection between the moving parts. The combustion powerplant is aided by two electric motors, one for propulsion and another for generating electricity that gets stored in a lithium-ion battery. Depending on road conditions and the way you want to drive, the powertrain switches between three modes - 'Hybrid', 'EV' and 'Engine'. Only in the least efficient 'Engine' drive mode is the petrol motor connected directly to the wheels - which is the setting you'd be in if you were to replicate this variant's claimed rest to 62mph sprint time of around 9s or the top speed of 112mph. For far more of the time though, you'll be using electric assistance to a lesser or greater extent. In 'Hybrid' drive, the engine's there to supply power to the generator, which in turn provides it to the propulsion motor. Finally, in its 'EV' setting, this Honda will be fully electric, though your operational range under milk float mobility when the battery is fully charged will be only 1.2-miles. You can also use paddles provided behind the steering wheel to maximise engine braking energy regeneration, so charging up the battery faster and increasing the amount of time the system can switch away from petrol power.

Visual changes to this improved CR-V are minimal; a blue-ringed Honda badge on the grille, smarter 18-inch alloy wheels and standard rear privacy glass - that's about it. This, apparently, is still (according to Honda) 'the world's favourite SUV', so a lot of people are going to have an opinion on how this fifth generation version looks. Most should be satisfied. There's plenty of chrome to please the Transatlantic crowd, while wide arches and large wheels pushed closer to the car's extremities help in delivering a bit of kerbside presence. Overall though, there's nothing too controversial here. Perhaps that's as it should be. This car's visual appeal has always been low key and you sense that's exactly the way loyal customers like it. Inside, the recent changes are a bit more obvious; a smarter silver finish for the centre console, the door cards and the dashboard. As before, many of the fixtures and fittings are borrowed from the brand's tenth generation Civic - including the instrument binnacle you view through the three-spoke wheel. It's one of those combination digital and analogue affairs, with stylised analogue temperature and fuel gauges flanking a central TFT-LCD screen. The back seat's pretty spacious. Sadly, the optional 3rd row seating you could have with the old conventional 1.5-litre petrol engine can't be packaged into this Hybrid model. The boot isn't as large as it was on that previous conventional combustion variant either, capacity falling from 561-litres to 497-litres in this Hybrid version (and 1,694-litres with the rear bench folded).

Extra technology has to be accompanied by plumper pricing, which is why the CR-V range now starts from just over £30,000. A few extra items of equipment are added in here to sugar the pill, including smarter 18-inch alloy wheels and, on the flagship 'EX' spec, standard wireless smartphone charging. There's a choice of five trim levels, 'S', 'SE', 'SR', 'Sport Line' and 'EX'. Even base 'S' models get full-LED headlamps, an 8-speaker DAB audio system and powered lumbar support. The most obvious rival to this car is the similarly priced Toyota RAV4 hybrid; you might also consider HEV hybrid versions of the Kia Sportage and the Hyundai Tucson. All other class contenders use either nominal mild hybrid technology, or pricey plug-in PHEV tech. All CR-V variants get a very high standard of safety kit, with the 'Honda Sensing' package offering one of the most comprehensive suite of active safety and driver assistive technologies in the class, combining radar and camera tech. Included are 'Forward Collision Warning', a 'Collision Mitigating Braking' system, a 'Lane Keep Assist' system, 'Lane Departure Warning', 'Road Departure Mitigation' and 'Traffic Sign Recognition'. The basic design is pretty safe too, thanks to Honda's 'ACE' 'Advanced Compatibility Engineering' body structure design technology, which employs a network of connected structural elements to distribute crash energy more evenly.

Let's get to the WLTP figures. For the 2WD Hybrid model, you're looking at 42.8mpg on the combined cycle and 120g/km of CO2. For the AWD Hybrid that most customers will choose, the stats are 39.8mpg and 126g/km. The overall perspective here is that once you take fuel costs into account and consider real-world efficiency, this Hybrid CR-V will cost about the same to run as the old diesel model - and be far better for the environment. And your overall running costs will be lower if you take this Hybrid's cheaper Benefit-in-Kind taxation into account. Whether all this is sufficient to justify this car's current pricing another question of course. If your annual mileage is relatively low, it may not be. Honda provides a series of driving tools to help owners maximise possible returns. There's an engine stop/start system of course. In addition, in the 'Trip Computer' section of the 'Vehicle Info' part of the centre-dash Honda Connect screen, there are 'Current Drive' and 'Previous Drive' read-outs, plus average fuel economy and range readings, along with a 'History' section, all of it enabling you to better track your efforts towards frugality. As for the warranty, well it's the usual three year package, though in this case, the coverage does last for up to 90,000 miles, rather than the 60,000 mile cap imposed by most rivals. As for depreciation, the Honda is among the best in this sector with a residual value of 40% after three years. Insurance is group 22E-24E.

This is as sensible as family segment lifestyle-orientated SUV motoring gets. A car for people who look at what a vehicle can do for them rather than what it says about them. End use you see, has been the over-riding design parameter here, not cutting edge styling, clever gadgetry, irrelevant pin-sharp handling or pointlessly powerful engines. As a result, a CR-V Hybrid is an extremely easy thing to live with, the kind of car you'll own, then wonder how you managed without. That may not be a recipe for media headlines but it's an approach that other brands could certainly learn from, explaining why so many CR-Vs are bought by folk who previously owned one. In summary, we can see why so many global customers will accept nothing less than Honda's interpretation of what an SUV of this kind should be. And what's on offer with this improved petrol/electric version is a model that could conceivably interest many more of them. Ultimately, it remains distinctively different, distinctively... CR-V. Which ultimately, might very well be all you need.