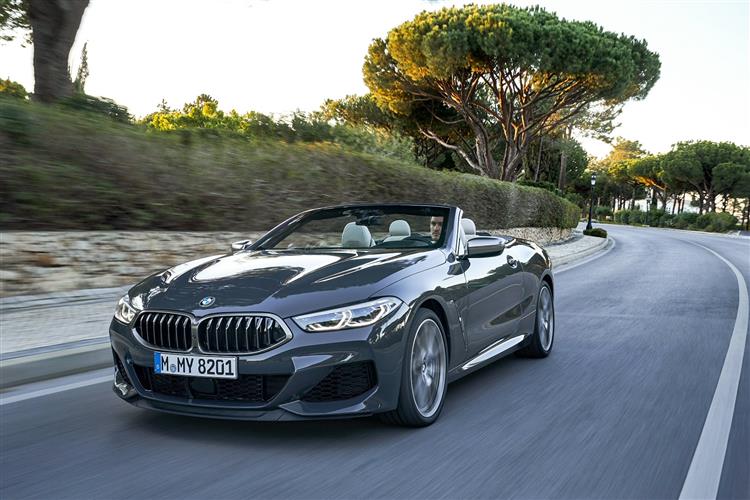 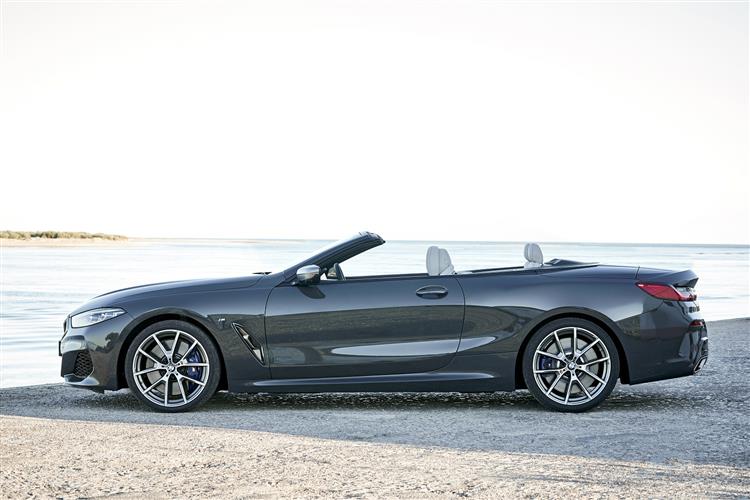 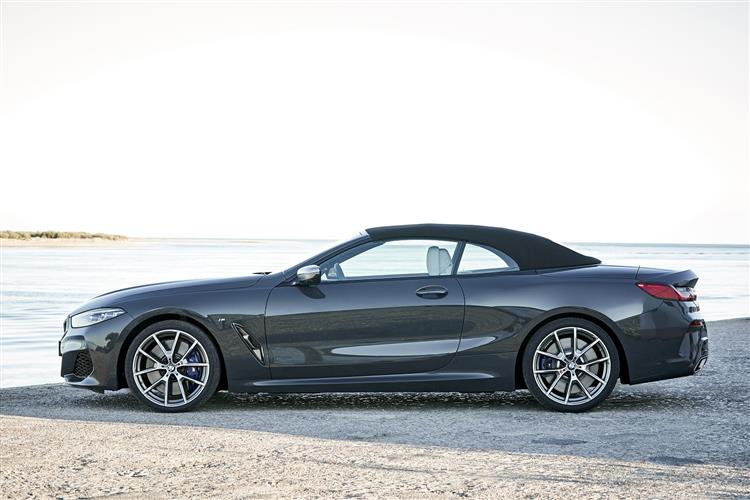 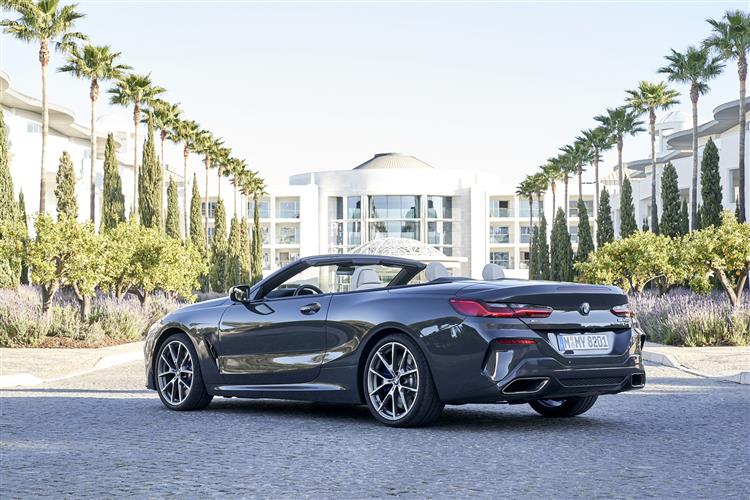 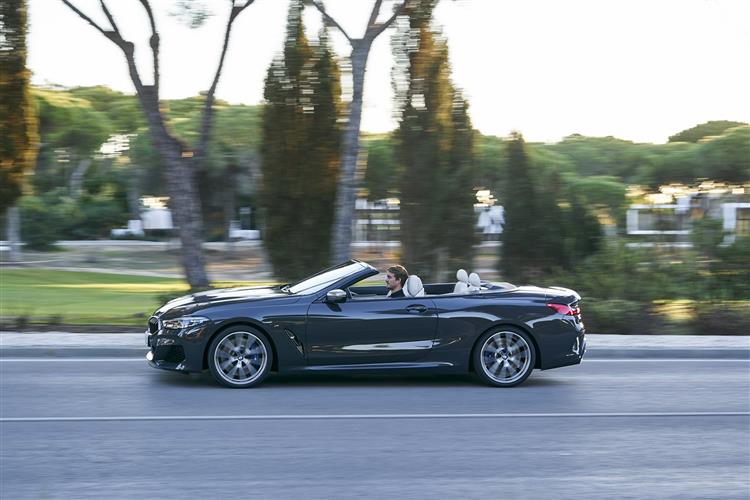 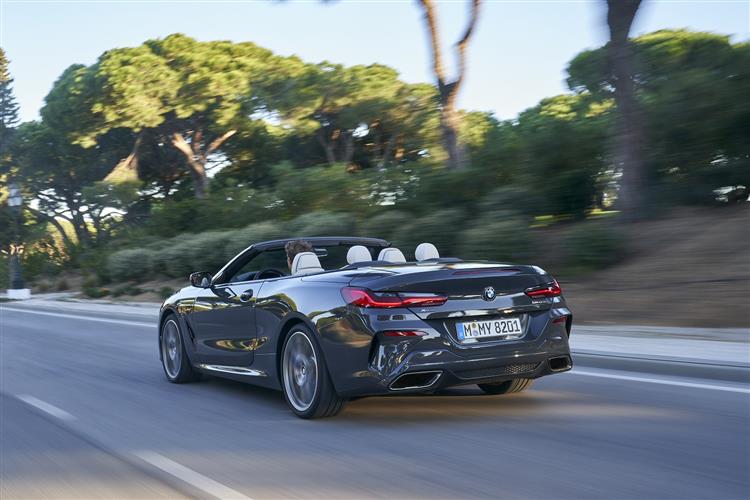 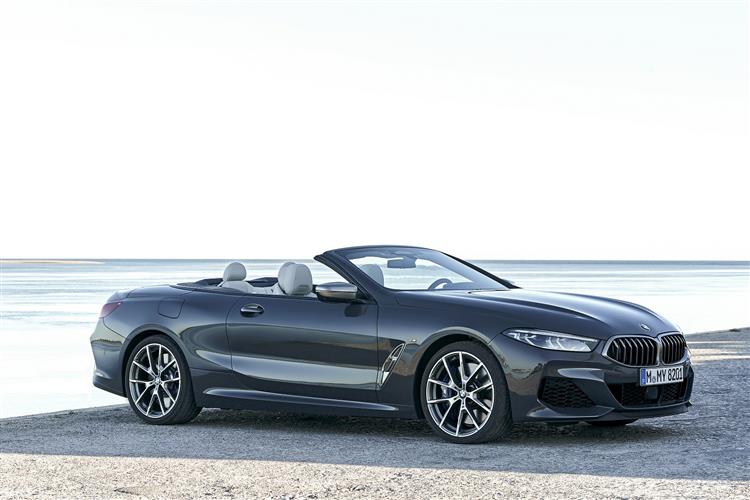 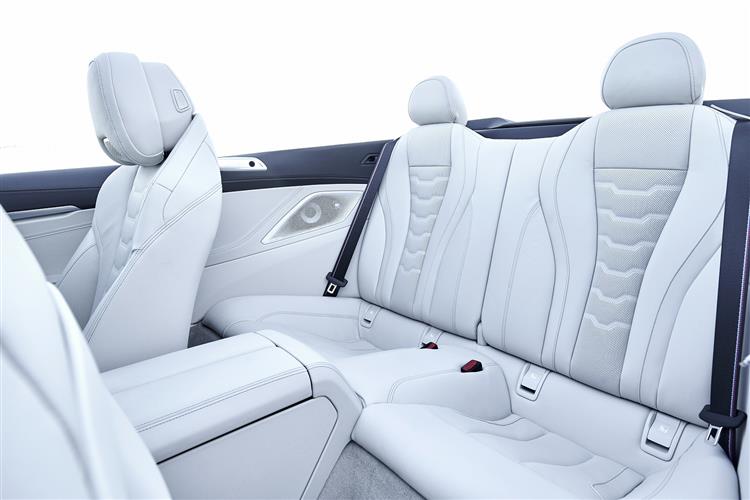 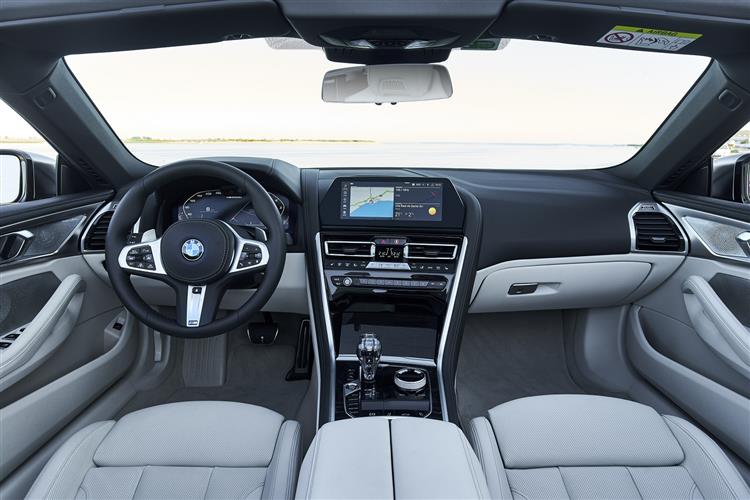 BMW's improved 8 Series Convertible is desirable in its own right, thinks Jonathan Crouch

If every BMW is still to be the 'Ultimate Driving Machine' promised by the advertising, then that slogan must mean many things. Sharp, rewarding handling for most is what this brand is all about but in some market segments, other virtues are just as important. Take up-market large luxury convertibles. Cars like Bentley's Continental GT Convertible and the Porsche 911 Cabriolet are all about Grand Touring - fast, stylish cruising, something BMW has more experience in providing than you might expect, with a product heritage in such cars stretching all the way back to the 327 Sports Convertible of the late Thirties. And all the way forward to this car, the 8 Series Convertible, here usefully improved. This model's predecessor, the 6 Series Convertible, was a relatively rare sight on British roads. Despite a hefty price tag, it offered performance, rear seat room and boot space all little better than a BMW 4 Series Convertible costing half as much. It was a car that sold on cachet - and that wasn't enough to tempt significant numbers of wealthy buyers from their Mercedes, Jaguar and Porsche models. This 8 Series model though, has proved to be a different proposition.

At the end of a day spent in pursuit of the kind of business that makes possible the purchase of a car like this, you want to be rewarded on your route home by a gloriously emotive soundtrack when you fire the engine and nose out into the traffic. That's certainly delivered by the M850i V8 version, along with an alfresco driving experience free, as you would expect, from all the roof-down buffeting and bodyshake that you'd get in a cheaper convertible. Which means that you'll be tempted to lower the roof more of the time, especially as it can be done in just 15s at speeds of up to 31mph. Raising it again cocoons you in a cabin almost as refined as you'd find in the alternative Coupe and four-door Gran Coupe models that BMW also offers in the 8 Series range. Unfortunately, the ride is somewhat firmer than some will want. And of course, it's fast. Even in the base rear-driven 840i variant, you've a 340hp in-line six cylinder petrol unit capable of sixty from rest in just 5.5s on the way to a top speed that would be well into the lock-you-up-and-throw-away-the-key area of licence confiscation were it not for a limiter that cuts in a 155mph. Otherwise, this car comes with a 4.4-litre twin turbo petrol V8, developing either 530hp in the M850i or a stonking 625hp in the top M8 Competition variant. All the powerplants on offer are torquey, with more than enough pulling power to make unnecessary as many as eight ratios in the ZF automatic gearbox. Use them and you can access performance that in the case of the M850i will catapult you to 62mph from rest in a Porsche-worrying 3.9s. The M8 Competition trims that to 3.3s. Toupees will need to be very firmly tied down.

This updated 8 Series Convertible now gets BMW's M Sport styling pack as standard, which gives the car a meaner look, with a more heavily structured front bumper and rear diffuser, as well as revised 19-inch wheels and upgraded brakes with blue calipers. Across the range, it's also now possible to order an illuminated front grille. V8 models get a unique front splitter and M8-style for the exterior mirrors, the rear spoiler and the diffuser. The M8 itself has redesigned 20-inch wheels. As you'd expect, the dimensions of this 8 Series Convertible body style match those of the 8 Series Coupe almost exactly. More of a surprise is that the weight of this open-topped variant isn't very much different either. A focus on body rigidity in the development of the 8 Series platform meant that only a small number of additional cabrio-specific and weight-increasing measures were required for this Convertible design. The roof is lightweight and provides superb acoustic insulation. When closed, it sits taut over the interior, thus retaining its coupe-like silhouette without compromising on design. A wind defector is standard. This can be set up in the rear-seat area to reduce turbulence when the roof is down. When not required it can be folded to half its size and stowed in the boot. Neck warmers integrated in the front-seat head restraints are also standard. There's very little back seat space but the rear-seat backrest can be split 50:50 and, thanks to this through-loading facility, the capacity of the luggage compartment can be extended as required. With the soft-top closed, the stowage capacity is 350-litres. When the roof is open though, your luggage space falls to only 280-litres. At the wheel, the key change with this facelifted model is an upgrade in the size of the central infotainment screen - from 10.25 to 12.3-inches. And the six cylinder model gets multi-contour seats as standard. Otherwise, things are the same as before.

Pricing starts at around £82,000 for the 840i, rising to around £111,000 for the 530hp M850i xDrive and around £133,000 for the 625hp M8 Competition version. Expect all the usual executive luxuries of course - leather upholstery and the BMW Live Cockpit Professional package, which gives you a 12.3-inch instrument binnacle dial display and a 12.3-inch centre-dash infotainment screen. All 8 Series Convertible models get xDrive 4WD, Adaptive M suspension and 'Integral Active Steering', which turns the rear wheels in either the same direction as the front wheels or the opposite direction (depending on vehicle speed). This allows for effortless lane changes, helps you dart through city traffic and facilitates a tighter turning circle with easier parking. Plus there's an M Sport braking system and you get the 'Sport' version of BMW's smooth-shifting 8-speed automatic paddleshift transmission, which means that Launch Control is standard.

If you're spending £85,000-£135,000 on your luxury convertible, you won't be worrying too much about frugality. But with BiK taxation in mind, the CO2 stats might be of interest. The M850i with its turbocharged petrol V8 is capable of combined CO2 emissions of 246g/km. The 840i improves that to 188g/km. The M8 Competition manages 255g/km. You'll pay handsomely at the pumps to keep this car on the road of course. The worst offender is of course the M8 Competition, which is WLTP-rated at a best of 25.2mpg on the combined cycle. Routine maintenance is dictated by 'Condition Based Servicing' that monitors oil level and engine wear, taking into account how long it's been and how far the car has travelled since its previous garage visit. To help plan ahead for the cost of regular work, at point of purchase you'll be offered a 'BMW Service Inclusive' package that lasts for three years and 36,000 miles. With this, after a one-off payment, you'll have the peace of mind of knowing that all normal work on the car has been paid for during this period, including items such as oil, spark plugs and filters. On to the warranty package. BMW offers a warranty that lasts for three years, no matter how many miles you complete. You can also insure your car through BMW, though as most 8s will be funded with company money through a lease deal, this brokerage fees are likely to be bundled into that.

There are only two ways I could really imagine anyone being disappointed by this BMW. If you expect it to be an out-and-out sports car. Or if you can't afford it. The first is unrealistic. Buy a car of this kind and you're buying a Grand Tourer. That's what the target market wants. And this 8 Series is very good indeed at GT motoring. Yet at the same time, significantly more dynamically able than its 6 Series predecessor if you should want to start throwing it about. As for the prices, yes they're high but realistically you can't really have any complaints about that either, given that rival brands are asking similar sums. Bigger, faster and sleeker than before, for me it's the most desirable convertible the Bavarian brand has ever made. A car you could comfortably choose over a comparable Porsche, Bentley or Maserati? You'd better believe it.